"Sent From My iPhone"

I have a post I'm working on that I hope to publish soon, listing some great iPhone apps for Moms.  But before I get to that, I have something I feel I must address.  It's those 4 little words: "sent from my iPhone."  I used to get so annoyed when I received an email from someone that ended with that little phrase.  Yes, okay, I know, you have an iPhone and I don't.  You're cool and on the cutting edge of technology, and here I am with my flip phone that is SO 2008.  Why do you have to rub it in?  I don't care what device you just sent me an email on.  Where will it end? Why not, "Sent from my iPhone which has been pimped out with a sweet custom carrying case and has the maximum allowable memory, while sipping umbrella-adorned cocktails on a white sandy beach in Cancun on my awesome vacation, sucka!" I thought about adding to my email signature, "sent from my desktop computer."  Or how about, "sent from my laptop from the parking lot of Starbucks because my internet is down and I'm too cheap to go in and buy a cup of coffee."

Of course we all know that this is something that the marketing geniuses at Apple automatically add to the end of your messages.  But somewhere in the back of your mind, as an iPhone owner, do you secretly like announcing to the world you have a cool new toy, with the fallback that it was Apple that made you tell everyone and not your own vanity?  Yeah, I have to admit that when I finally got one, it was kinda fun to inadvertently tell the world that I was now one of the cool kids.  Then two seconds later I realized I was one of those people that I didn't want to be.  And since I have 2 kids and 3 businesses to juggle, it is finally 3 months later that I decided to investigate how to stop it.  Here's how. Careful now...once you read on and obtain this knowledge, there is no un-learning it, and there goes your excuse to brag... 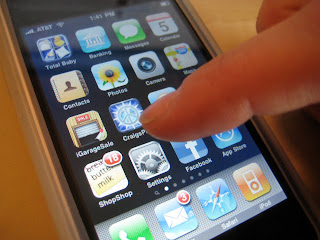 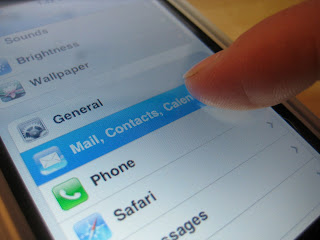 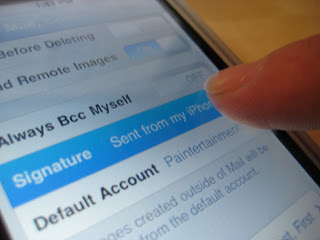 4) You will now see the signature that Apple has so graciously provided you.  How nice of them. 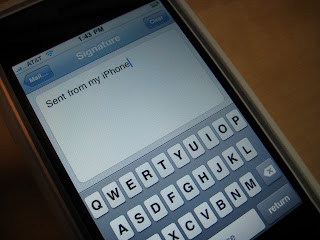 5) Now erase it, or type a real signature, like, oh, say...your NAME?! (and maybe some contact info or something else actually useful!) 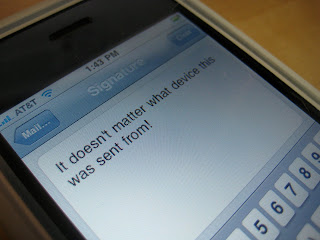 Voila!  So there you have it...it's as simple as that.  Do-it-yourself humility!  Sorry to burst your guilt-free gloating bubble, but you no longer have the excuse that Apple made you do it.  And I apologize to those of you who have received emails from my iPhone in the past few months I've had it...I will now stop rubbing in how cool I am because I've finally changed it!  ;-)
Posted by Gretchen Fleener at 1:56 PM