So last week I was making one of my regular treasure hunting trips to my local Goodwill store, and came across this bowl, which I immediately recognized as the "Catch bowl" from Boon

The only reason I recognized it was because I am an industrial designer and have seen it in my trade publications.  As someone who works in the profession that creates objects like this, I find it interesting to see how products are treated in a thrift store.  It was priced very cheaply, just $0.49 cents, which is even cheap for Goodwill.  This is how I usually find the best deals...when the store doesn't know quite what a product is or what it's for so they mark it really cheap.  These are only $6.99 new, but I thought it was still a great deal!  The woman at the check-out looked it over on all sides with a puzzled look, then suddenly smiled and said, "oh!  It's a bowl that looks like a hat!  Isn't that cute?"

While the check-out lady was correct that it does look like an inverted baseball hat, that is not the intent of the design.  On the bottom is a suction cup, which keeps the bowl securely attached to the table. (if you have smooth table)  The rubber "fin" you see coming off the side actually faces toward your child, catching their drips under their chin as they eat.  It's a great, simple idea...similar to bibs with pockets in them, only it catches spills from the food source rather than from the kid.  Here's my little fireman trying it out with his breakfast cereal: 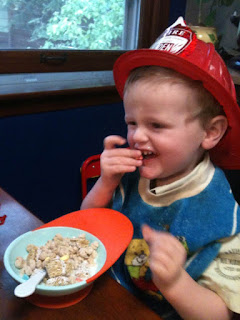 I like the product...it's a cute design, works well, and is not a bad price.  The suction cup is not stiff like many of the other cheaper suction cup bowls that I have; it is soft and really sticks well, even to our wood table top that is not 100% smooth.  The "catch" does catch drips, so I have less to wipe off the table.  All in all I'd consider this a nice-to-have, but not a must-have.  Even if you combine this bowl with a pocket bib, a placemat, and even a floor mat, you will still have to clean up the bowl and some missed drips & spills.  So, it doesn't completely eliminate the issue of messy kids, but no product really ever will.  (except maybe in the future when we have robots that clean up after our kids)  But, it does present a clever way to minimize messes.

I always get extra excited to find these "designer" products in thrift stores for pocket change.  But, then again, I always think in the back of my mind..."I hope none of the products I design ever end up in the thrift store!"  However, after some more thought, I don't think that's such a bad thing.  Just because something was donated to a thrift store does not mean that it was a bad product.  On the contrary, it was a good enough product that when it's original owner was done with it, they couldn't bear to just throw it away...they thought someone else would be able to use it.  After all, your kids do eventually learn how to eat without dribbling, and most products are not designed to be useful to one person throughout their entire life.  Every product's life cycle is affected by many things: it's specific purpose, it's target market, it's aesthetic appeal, it's emotional connection, and it's materials & construction to name a few.  So some day if I see one of my products on the thrift store shelf, I will hope that it is not broken, and think to myself, "wow...that product has been around the block and is still going!  I wonder where it will end up next!"
Posted by Gretchen Fleener at 12:56 PM