It's an age-old struggle: child vs vegetable.  We all want our kids to clean their plates, but where veggies are concerned, well, we all know what happens (or more likely, doesn't happen). I heard about this book a long time ago on TV, and have always had it on my mental list of books I'd like to get someday.  Deceptively Delicious

is a cookbook by Jessica Seinfeld (Jerry Seinfeld's wife).  In it she shares the recipes that she makes for her family, and how she hides vegetable purees in every one of them.  I picked up this like-brand-new copy at a garage sale a few weeks ago for $1.

My little boy is actually a great eater...he loves fruits and veggies, will try just about anything, and will always surprise us with the distinctive flavors he will just love...like Thai food, sushi (cooked of course), and Indian.  So why get a cookbook that's all about sneaking veggies into your kids' food, you ask?  Well, I really picked it up for a couple reasons.  1) The recipes I've heard are tasty, and if it tastes good AND has healthy stuff for you, it's a good one to have anyway.  2) My husband refuses to eat broccoli and cauliflower, among many other food items I consider staples.  So, I thought if nothing else, it would be fun to try to sneak something into his food and see if he'd notice.

The first part of the book explains how to make the vegetable and fruit purees that are called for in all of the recipes.  Basically you want to steam the veggies and then puree them in a food processor.  This was not really new to me, since I make my own baby food, and it's basically the same process.  But, the book does a good job of explaining what to do to prepare your pantry for the recipes to come.

Last week, while my husband was gone in Chile on business for a week, I bought some broccoli and cauliflower, steamed and pureed it, and froze it in 1/2 cup portions.  I figured if the recipes don't work out, I can always feed it to Toby when he starts solid foods any day now.

Last night I decided to try a couple recipes for dinner.  The first one was the mozzarella sticks.  I figured it would never cross anyone's mind that these had anything healthy in them whatsoever.  However, turns out their creamy, white innards are perfect for hiding pureed cauliflower.  And so, with my sneaky mad-scientist-like laugh ("bwah-haa-haa-haaaaa"), I went to work.  I followed the recipe to a tee, including putting them in the freezer for 20 minutes before frying them.  However, while I do consider myself to be one who knows her way around the kitchen, they turned out to be more like white piles of goo with bread crumbs. 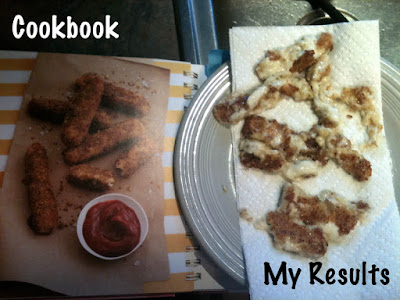 So here's a photo of my plate of...um...stuff, next to the cookbook photo.  Not exactly like the picture.  They seemed to be working great, until the frying part, during which they all fell apart and melted into the delicacy you see here on the right.  While they didn't turn out as planned, they did still actually taste really good.  My husband came home and I warned him that I made two things...one turned out good and the other not so good.  He went right for these while saying, "well, can you still eat 'em?"  as he scooped one up I replied, "yeah, maybe with a spoon."  But all was not lost, as I got the reaction I was hoping for, "Well they taste good!"  At which point I revealed to him, "they have cauliflower in them!"  Here I thought he would suddenly change his mind and start making fake gagging sounds, but to my surprise, he said, "oh, you tricked me!"  And then he had another.  So, while they did NOT turn out like the photo, and in no way are able to be dipped in ketchup like the book suggests, I still got the satisfaction of knowing I had just fed my husband cauliflower without him knowing, he ate it, he liked it, and after being told what was in it, he still liked it.  Now if I can just figure out how to fry the darn things without ending in a gooey cheese massacre, I'll totally make them again! 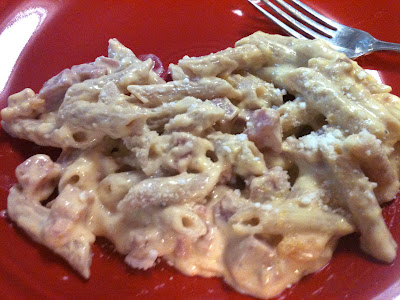 The other recipe I tried was the main dish.  I really need to get some groceries asap, so I was surprised to find that there was a recipe that used some of the odd things I had lying around that I wasn't sure how I'd use them up....a half of a butternut squash, some plain cooked noodles, and an opened block of cream cheese.  I made the "macaroni & cheese 1" recipe, which called for all of these things, among others.  The butternut squash was the hidden veggie puree, although you also could use cauliflower in this one.  I thought I'd do this one, since I know my husband loves butternut squash anyway, and didn't have to "trick" him into trying this.  I also had half of a package of diced ham in the freezer, and decided to use that up too by adding it to the recipe.  (My husband is a carnivore and requires some kind of meat every night for dinner.) This one turned out GREAT and was a hit with everyone.  While I used penne instead of macaroni, it looked as good and creamy as the picture in the book.  It was creamy, thick, flavorful, and filling, and adding a little ham made it into the main dish I needed for the night.

While I've only made 2 recipes so far, I think this is a fun book to have on hand, whether you have a kid who's a picky eater, or you just want to find ways to get more nutrition into your meals.  I am dying to try out some of the delicious looking desserts, like chocolate cake, brownies, cupcakes, and cookies...all with hidden nutrition inside.  I'll be sure to let you know how they turn out!
Posted by Gretchen Fleener at 7:00 AM