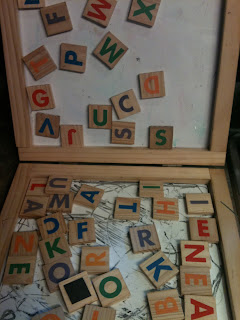 Today I picked up this little "write & wipe magnetic learning center" toy at a garage sale for 50 cents.  It's like a little wood briefcase that opens up, with magnetic white boards and magnets inside.  It looks really ugly in this photo, which is probably why it was only 50 cents.  But, I love wood toys, and good travel toys, so I picked it up.  The marker cleaned right off with a little Expo dry erase cleaner and it looks like new!  I thought it would be fun for Sammy to play with the magnets on a road trip, or color with a white board marker.  (once he's old enough that I can trust him with a marker in the car)


But the real reason I'm posting this is because the image on the outside of the thing is just hilarious.  Look at the boys' faces.  Gee, they sure look like they're having the time of their lives, don't they?!  This really reinforces the idea that learning is fun, now, doesn't it?! 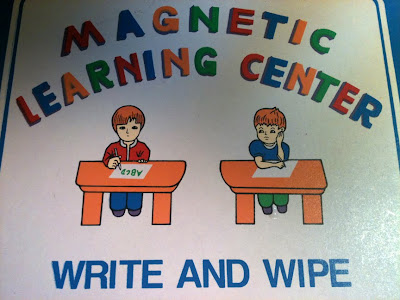 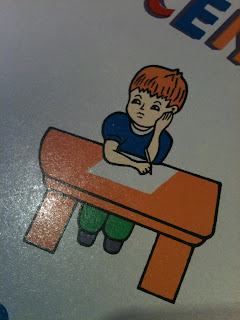 The boy in blue looks jealous that the other boy is actually writing letters.  Clearly the other boy has a super awesome toy like the "magnetic learning center" that taught him to write so legibly.  That, or he's just jealous of the other boy's super sweet red sweater or perfectly smoth and spherical head of "Ken" hair.

Or maybe he's just depressed because the perspective in this image is so out of whack, that he's afraid if he even tries to write anything down, it'll just be skewed in the wrong direction.

Alas, blue shirt boy is destined to a life in the shadows, staring aimlessly at his blank piece of paper, longing for "the good life," that only the magnetic learning center can bring. Upon closer examination, however, this lucky, literate, dashing young lad in red doesn't look so thrilled himself.  Maybe the grass isn't as green on his side of the fence after all.  Perhaps things aren't all that easy for him either.  Just because your parents can afford to buy you fancy red sweaters, weekly haircuts, and incredibly effective learning tools like the magnetic learning center does NOT mean that life is any easier for you.  Noooo sireee bob.  Nobody understands the kind of pressure you're under, being expected to get straight A's just because the magnetic learning center has made you intellectually superior to your peers...not to mention the hour and a half of sleep you have to lose by getting up earlier than everyone else to start taming your locks into the fine, sculpted specimen that everyone has come to expect.

On second thought, maybe the magnetic learning center is not such a great toy after all.

Yes, folks, these are the things that I notice and think about on a daily basis as a designer.  It's a blessing and a curse.
Posted by Gretchen Fleener at 8:20 PM