All Aboard the Poo-Poo Train!

We've reached a huge milestone this past week in a certain 2-year-old's development...he finally made his first "deposit" into the toilet rather than his pants!!  I finally understand why my mom took that photo in my baby book of me with my pants around my ankles, proudly pointing at the potty chair.  I photographed every moment of this big day too, although I'll spare you the photographic "details."

I know that different rewards work for different kids...my friends have successfully used dollar store toys, stickers, candy, high-fives, and my favorite so far: a chance to blow out a birthday candle!  The only thing I'm certain of with potty training is that every kid learns at their own pace and is motivated by different rewards.  Here's what's worked for us.

Our little 2.5-yr-old has been going "#1" wonderfully for months, but #2 has been a challenge, and I just couldn't seem to catch him in the act soon enough.  It became clear to me early on that this was going to be the biggest challenge, and call for the biggest reward.  One afternoon last week it must have clicked.  I think that all the planets had aligned just right at that moment...the mounting excitement of our promises to go pick out a new train toy, the fact that I got out the little potty chair again so he wouldn't have to stray too far from his toys to go, "the Poopsmith Song

" blaring on the stereo, the tummy full of food, and the favorite pair of Thomas undies

we didn't want to get dirty.  When he ran to me saying he had to go potty about 5 minutes after he had just gone, I knew it was something more...the "movement" we've all been waiting for!!

I figure, if I'm going to spend any money on a reward for him, I'd like it to be something that will really last, that he can keep and play with for years to come, as a reminder of his "accomplishment." We had a few wooden Thomas cars

already, and I knew I had a box of Brio wood tracks

stashed away from a garage sale for after we move, so I thought maybe individual engines would make a good reward for a little while. 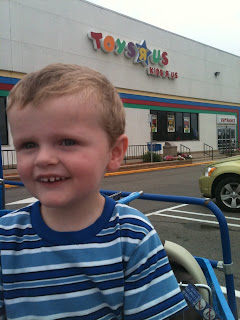 After my huge fanfare of dancing, clapping, cheering and high-five-ing, we piled in the car and made a mad dash for Toys-r-us.  Little did I know that those wooden Thomas engines 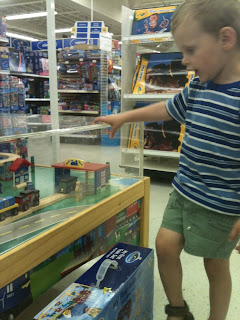 After enjoying the ability to roam free in the train department and check out everything, we decided on an off-brand but well made wooden track set for the big first poop.  Mommy was sold on the fact that the 50 piece set cost less than one Thomas accessory, and it would work with both the Brio and Thomas tracks and trains.  Sammy was sold the minute he saw that a bridge was involved. 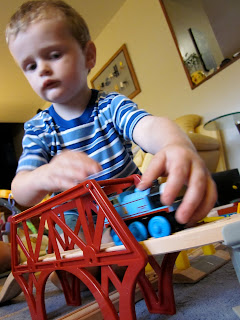 Aaah...enjoying the fruits of his labor!  I wanted to make sure that we'd have a repeat success the second time, and Sammy couldn't hardly wait to go again when we told him he could not only get a new train car for his track, but could go to Choo Choo Bob's to pick it out. 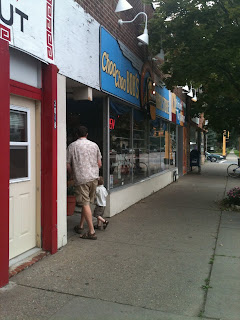 It was two days later on a Saturday afternoon when he did the deed again...perfectly timed between our morning and afternoon plans, where we actually had just enough time to get to Choo Choo Bob's and back.  It's much farther than our local Toys-r-us but is a fun destination in itself whether you buy anything or not. 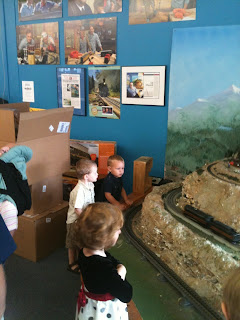 First we checked out the model trains in the entrance. 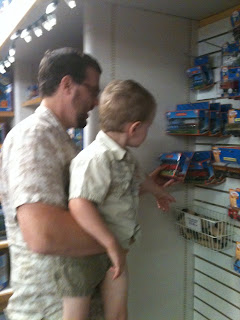 Daddy lifted him up to check out all the engines. I think we were just as excited as him, if not more.  It was clear that he enjoyed the trip to the store with Mommy and Daddy just as much as picking out his new train. 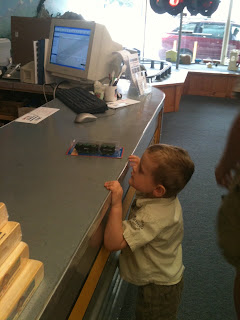 After much deliberation, and distraction by the fun train tables set up in the store, he chose Emily

and carried her up to the front counter to pay.  Emily has gone EVERYWHERE with us since.

I've already purchased a couple more trains online cheaper, so we don't go broke buying trains.  I'm thinking I'll give him a couple more engines, then gradually ease off on the rewards to things he loves that are cheaper or don't cost, like a movie night with popcorn (at home), a trip to the splash pad, a phone call to Gramma, a walk to the park, a cartoon, a game on the iPhone, etc.  We'll see how it goes...so far we're at 4-for-4 in the toilet... knock on wood train tracks... and hope to keep the momentum "going!"

Got any tips or tricks that have worked for you little one when it comes to going "#2?" Please do share!  Different things work for different kids and I'm sure we all could use more ideas...I know I'll probably need some other motivation for Toby when he gets to this age! 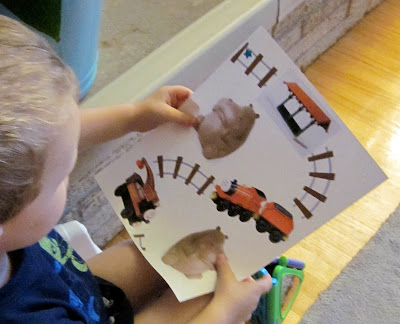 I didn't put any words on the chart because he can't read anyway and it's really for him.  Instead I found an image of a hippo online and put that on there. Instead of just boxes, the "chart" is made up of train tracks. He has a clear visual now of where he is headed and what his rewards are along the way.  We put one star sticker on right away and since I told him the next time he goes he gets a toy station (I've had one stashed away for a while now from a garage sale).  So, there is one empty box to fill with a sticker before he gets the station.  After that, three more stickers will lead him to the James engine

(currently in the mail and on the way from Amazon), and 3 more times after that he gets the Harvey crane engine

(also on the way from Amazon!)  So far he's got an every-other-day schedule going so this should last a good couple weeks.

The minute I explained how the chart works, I saw it click in his head.  He immediately took the chart and ran to the potty chair to work on his next "hippo" so he could get to the station.  While he sat there he pointed to each square, saying "this one, this one, this one, then James!" I was pretty amazed that he caught on so fast.  I wasn't sure a 2 year old could really grasp the whole sticker chart thing but when put in his choo-choo terms, he got it right away!

This is something anyone could do, just by drawing tracks or some other imagery (squares, circles, a road, whatever) to represent each "square", and you can glue images along the way to represent the rewards, whatever they may be for your child (google images works great for this!).  Anyway, I thought I'd share this update as it seems to be a great motivator so far!
Posted by Gretchen Fleener at 10:52 AM