I used to have a bin full of Sammy's snack items...it would hold a rotating selection of raisins, peanuts, pretzels, goldfish, cereal, etc.  Every time we went out and I wanted to pack a snack, I'd open every container and sprinkle a little bit of each into his snack trap 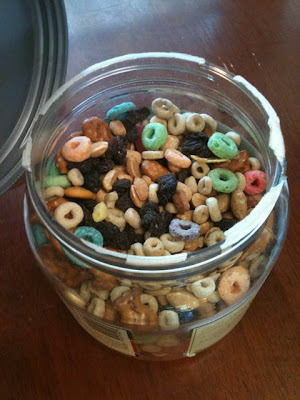 Well, most recently I've decided to just mix up my own snack mix for him. I use this big plastic jar that originally had some of my husband's trail mix in it, and fill it with a little of everything.  Now all I have to do is open the jar and dump one thing into the snack trap.  It works great and saves a lot of time.  This is probably one of those things that I'm the last to think of, but just in case you didn't either, I thought I'd share!

I also realized that snacks don't really have to be shaped like fish or teddy bears for your kids to like them.  I'll break up little pieces of graham cracker and Sammy gets just as excited as he would over Teddy Grahams, for a fraction of the price.  Same with pretzels...above you see the goldfish pretzels but now I have the huge jug of pretzels that he likes just as well.  Cereal also adds a little sweetness and color, and every now and then I'll sprinkle in a few chocolate chips, which he loves to discover in his snack!  M&M's or marshmallows make great little surprise treats too that I use sparingly if on hand!
Posted by Gretchen Fleener at 1:27 PM