ID Mommy Product Reviews: When You're On the Go and Gotta Go...

Last week I decided it was time to really dive into the whole potty training thing head first and not look back. We've been reading potty books and sitting on the potty off and on for a while now, and my little man did go in the potty chair a month or so ago.  But, this time it's for real...time to be consistent!

Once I made the decision to give it my all, I knew that however lofty this goal may sound, I am going to stick to it no matter what...sure, I'll keep putting on a diaper at night for a while, and when he's in the church nursery until he gets better at his "holding it in" skills, but I'm bound and determined to provide an instant toilet in the time it takes the words "potty mama!" to come out of his mouth, whenever possible.

So, naturally, I began doing a little Amazon shopping.  I like browsing Amazon, whether I end up buying there or not, because I can read other parents' reviews and feel like I'm making an informed decision.  I ordered these training pants

(until then we just went straight to real underwear, which is working just fine around the house), a portable potty chair, and a folding toilet seat.  I know we're going to be making a few road trips this summer to visit family, and I wanted a solution for all locations, including both public toilets as well as cornfields along the highway in middle-of-nowhere, Iowa, when the next rest stop is a zillion miles away.  Here's what I ordered:

I picked up the "On the Go Portable Potette

" for those times when we can't necessarily get to a toilet in time.  They never show you enough photos of products and how they work online or on packaging, especially for a product designer like myself who wants to know all of the intricate details of it's construction, so I took some pictures to satisfy your curiosity too.

I got the potty and a package of refill liners (A). It's definitely small and portable, and could probably even fit in a diaper bag if you have the space (B).  There are two legs that fold out (C) and snap into place.  The liners (D) look basically like a plastic shopping bag and fit inside (E), with an absorbent pad inside.  The "handles" on the bag hook around each leg (F), and then it's ready to use (G).  I like how you can "load" the potty seat with a liner and then fold the legs back up again (H), so it's already ready to go at a moment's notice.  There's even a plastic drawstring bag to store and carry the potty seat in (I). 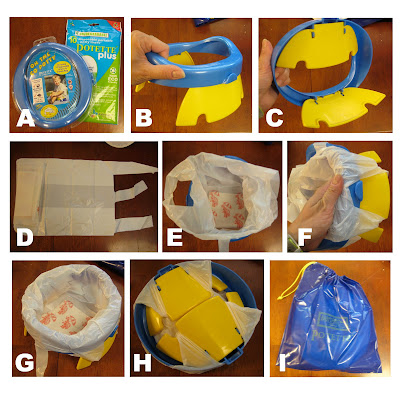 Our first road trip was only about an hour, but if you're potty training a toddler, you know that's an eternity!  It did feel good to know we had this ready to go in the back seat if we needed to pull over, and we did several times.  So far he's only actually gone in this once, and it worked well.  You do need to keep a watchful eye on their aim if you have a boy, as the front "lip" is not super high.  But, it does the job in a pinch...at least a lot better than that paper beverage cup from McDonald's that you have lying under the back seat.  The padded liner didn't soak up EVERYthing, but does help to contain quite a bit.  I was a little worried about how thin the liners were, afraid they might tear easily and send pee all over our new vehicle.  But, luckily that has not happened, and hopefully will not ever!

, which is designed to fit in your diaper bag.  I shudder to think about sitting my child's pristine little bottom on some disgusting gas station toilet seat.

In reading some of the customer reviews, someone mentioned that they were worried that their kid's behind would get pinched where it hinges.  This would be really hard to do if you fully open it up and then sit your child on it...the plastic above the hinges overlap (see F, below), I'm guessing to prevent that exact thing from happening.  It is a few inches thick once folded up (B), but is still fairly compact.  You simply fold it in half one way (D) and again the other way (E), so the part that touches the toilet seat folds into itself, keeping the part your child sits on clean.  Photo (C) shows the underside of the seat.  It has rubbery gripping pads on it (G) to help keep it from sliding around.  Once open, you position the folding potty seat towards the front of the toilet seat (H).  There are little tabs on the underside that should sit against the front edge of the toilet seat, and handles that stick out so your child grabs those instead of the nasty toilet. 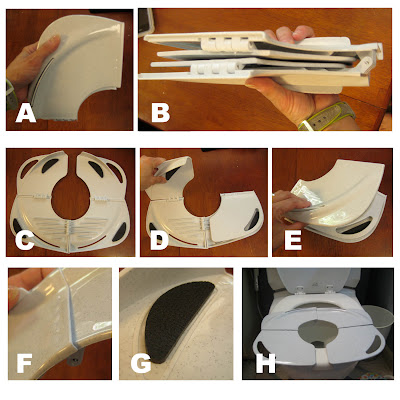 My first experience with this product went great.  We were about 6 days into potty training, and I took my little guy to Target...in a diaper, just to be safe.  On the way through the check-out he told me he had to potty, which was a victory already, being distracted and in public. He held it in while we checked out, raced over to the bathroom, only to find the Women's room closed for cleaning and the family room occupied.  We waited, and waited...my panic'ed screams of "hold it in, Sammy!  hold it in!" clearly had no affect on the high school aged boy slowly mopping the floors inside.  "Oh no! Make a mess, Mommy!" He cried... (In hindsight I should have just burst my way into the bathroom.  Little plastic yellow tent signs and high school boys have no concept of the urgency behind a potty training toddler and a desperate Mommy.)  Finally the kid finished mopping and we raced in...I whipped out my folding potty seat, and it fit perfectly on the toilet and was very stable.  Amazingly enough, Sammy had held it in that whole time.  VICTORY! And it was SO worth it!

We've already used this countless times over the past week in public restrooms and friends' and family's houses.  A few of the "cons:" On some toilets it bows a little in the back, but it does the job and is sturdy enough that it won't just snap in half.  You do have to use it correctly, toward the front of the seat as the instructions state.  I'm still a little grossed out about putting it on a public toilet and then sticking it in my bag, even though all of the surfaces that touch the toilet seat fold in on each other.  So, I do often spray it down with my little pocket Lysol spray

, and slip it into a gallon ziploc baggie to keep any cooties contained!  (it also comes packaged in a ziploc baggie, inside the box.) Also, in order for my little guy to sit back far enough to aim IN the toilet, the front edges rub against the backs of his knees.  This doesn't really matter for most kids I'm sure, but with the eczema he has behind his knees in the summer, he does sometimes complain that it hurts, at which point I insert the "mommy cusions," my pointer fingers, between the backs of his legs and the folding potty seat.

I already have a couple potty solutions at home as well, which my little guy has already become accustomed to seeing around the house...

sits on the toilet and works great at home.  We have an elongated toilet seat, so this thing slides quite a bit from front to back, which is a bummer.  We just have to help him get seated.  But, his delicate posterior clearly prefers the cushioned seat to his potty chair.  It also eliminates the need to dump a reservoir of pee that is present in other potty chairs...just sit and flush.

However, when you're just getting started, I've heard time and time again that it's a good idea to put potty chairs all over the house, so there is always one really close by.  It makes sense, at least until they learn to hold it long enough to get to the toilet in time.  Otherwise, you may have your little piggy going wee wee wee all the way down the hallway.  I have one little potty chair, similar to this Baby Bjorn Little Potty Chair

, which works great and is easy to move around, dump, and clean.  You can get very similar ones at Ikea, and at $3.99, they are cheap enough to put all over the house.  I also have a taller potty chair with a pull-out container to dump.  These two plus the seat topper have worked great for us.

So there you have it...these are the potty training "supplies" we have been using for about the past week and a half or so, and he is doing fantastic already.  Now we still have yet to master going "#2," and keeping dry at night, which are probably the two biggest hurdles of potty training.  I'd love to hear any tips and tricks you seasoned mommies out there have to share!  What worked best for you?
Posted by Gretchen Fleener at 1:46 PM