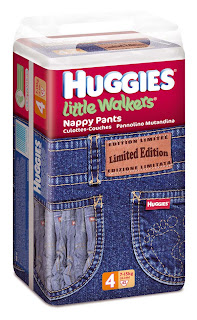 Last week I came across an end cap in Target, displaying these new denim diapers by Huggies.  Some people think they are creepy.  I don't see what the big deal is...after all, don't we put denim shorts and jeans on our babies, over their diapers, anyway?  Okay, the kid on their website who is clearly using some kind of styling gel is a little creepy to me, but it's not so unusual or creepy to see a baby in denim.  I think it's a clever exploration of a way to get people to see your brand, rather than hide it under clothes.  It's clearly an experiment for Huggies, which you can tell by the "out" they've given themselves by labeling them "limited edition."

Some also seem to think that this is a new idea to make diapers that are designed to look cool without clothes covering them up.  This is really nothing new...the cloth diaper industry has been doing this for a long time.  Check out G Diapers for instance, the plethora of patterns on Cottonbabies where I get my cloth diapers, or The Eli Monster (built from the "bottom" up by a local "MOMtrepreneur" whom I hope to interview here soon too!)

I figure, if you don't like the denim pattern, then don't buy them...or put clothes over them just like you've always done.  Some on the web have called them "impractical."  This doesn't even make sense...they are the exact same product, just with different graphics.  They work the same.  It is interesting to see how people react differently though to the exact same product, with just a different graphic treatment.  Nobody really ever says anything about the cutesy, pastel patterns and licensed characters on your average diapers.  Look at all the press Huggies is getting from this...good or bad...it's drawing attention!  I interned for P&G twice during college, once for Pampers, and we spent hours upon hours on the designs on their diapers...I would love to have been a fly on the wall in that board room!

WARNING: The rest of this posting contains explicit content that may not be for those with a weak stomach...Yes, folks, we are talking about the "P" word here..."POOP!"

Apparently they have had some advertising out there , which uses the word "pooping" at the end and has been seen as controversial to some.

I have to say it's pretty ridiculous to hear that some networks find the commercials to be offensive because of the use of the word "pooping" being displayed on the screen.  Come ON!  If you've seen even a fraction of the garbage that our kids have access to on network TV alone, you know that there is a LOT more concerning content out thare than a word that describes a daily bodily function.  I mean, seriously, we and our kids live and breathe the word "poop" all day long, and as a mom I may as well just bathe myself in it some days, with the way I am are constantly dealing with blowouts, explosive diarrhea, potty training "accidents," and the like.  Just yesterday I lifted Toby out of his car seat, literally DRIPPING in poop from a blowout...had to disassemble and wash the car seat fabric, strip him down on the hard floor, and, well, I digress.... From the moment babies are born, pooping is right up there with one of the 3 only things they do all day long: eat. sleep. poop. repeat.

I understand that there are probably people out there who DON'T have kids in diapers, and for them, it may be inappropriate, offensive, or uncomfortable for them to be subjected to the word "poop."  To these people I must say, the secret is out...we all know that you pooped as a baby too, and that you still do as an adult.  And if you don't believe me, you might enjoy this good read

Posted by Gretchen Fleener at 2:29 PM