How To Make BBQ Grill Cupcakes

After having so much fun making the cheeseburger cupcakes, when I found this idea for bbq grill cupcakes in Family Fun magazine, I just had to make them!  And what better reason than for a father's day family barbecue? 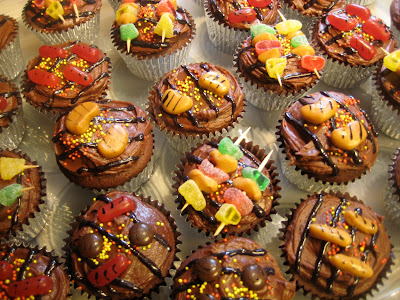 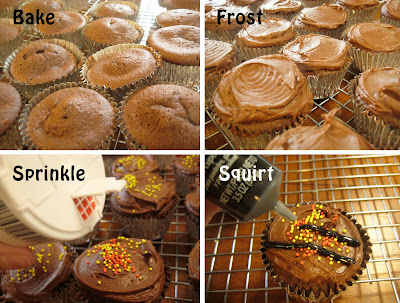 Whether you prefer a mix or recipe from scratch, bake some cupcakes and frost them with chocolate frosting.  (I used a triple chocolate rum cake recipe from the Cake Mix Doctor

for mine...LOVE that book!) Don't worry if they aren't perfectly "dome" shaped cupcakes.  They actually look better when they are more flat, like a real grill.

Next, squirt on the grill bars.  The Family Fun instructions says to dye some white frosting with black food coloring and pipe it on.  I just picked up a tube of black, ready to go, to save a little time. It even has some sparkle in it. 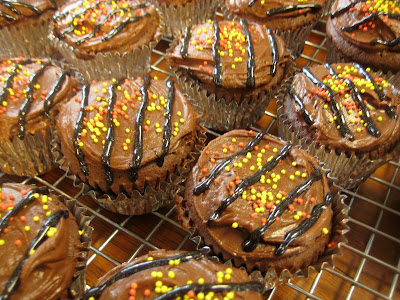 Now that you have your little grills all fired up and ready to go, it's time to throw some meat on!

Here are some of the variations I tried... 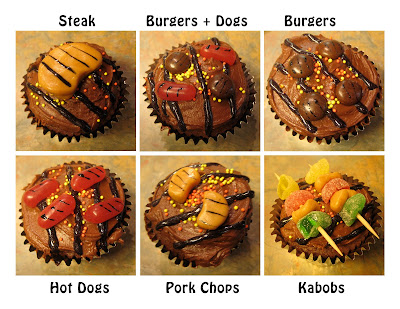 The kabobs are definitely the cutest!  But, they are also the most time consuming! Funny how that works out.  You will need some toothpicks for the "skewers," and then some candy fruits to represent your "veggies."  I used some sour patch fruit because my husband likes them, but you can also even use real dried fruits. To make things a little quicker, I lined up a bunch of candies and cut them in half all at once. You'll want red, green, and yellow pieces.  For the "meat," you'll cut a piece of caramel into small chunks.  First, thread on one piece of fruit candy, and push it to the center.  Next, slide a piece of caramel "meat" on either side of the center candy.  Finally, slide one of each of the remaining fruit candy colors on either end. 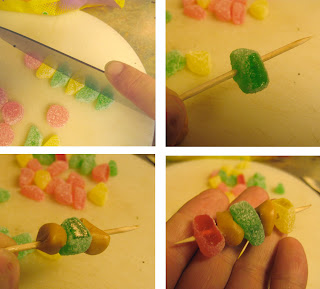 Now lay two kabobs on each bbq grill cupcake and grill to perfection!

The Family Fun recipe uses caramel creams with white centers, which look like bone in the candy "meat." I couldn't find these so I just used regular caramels.  I also tried making some pork chops.  Here's how I did them: 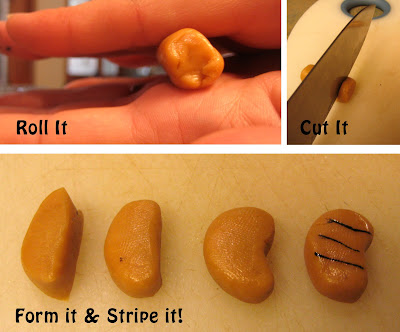 Just do the same thing but larger for larger pieces of meat, such as steaks!  Now if you've been able to find the caramel creams, you'll have little white "bone" showing in the centers too!

While the recipe calls for Hot Tamales for hot dogs, I got some cherry flavored Mike & Ike's instead.  I also tried making some with caramel, rolled small and cut into pieces.  I think the caramels looked more like the real color of hot dogs.  But, the red Mike & Ike's really added color to my tray of finished cupcakes, so I did both!

The grill lines on the meat really make it!  Here's how I did it.

Just dip a toothpick into a bottle of black food coloring, and then quickly swipe it across the meat to make lines.  It's much easier to do this once the "meat" is on the "grill," rather than before putting it on the grill, to avoid them rolling around and getting food coloring all over.

I also tried using M&M's for burgers.  I bet some upside-down chocolate or peanut butter chips would work great as well!  Some of the cupcakes, as you can see, I mixed hot dogs and burgers on the grill.

Now if they had not taken me 3 hours to make (in between toddler wrangling), I might have also tried making some of their cute lawn mower cupcakes...but maybe I'll save those for next year!
Posted by Gretchen Fleener at 8:00 AM