Every kid needs some sort of security item. When I was little, I had a blue blankie, which bore a striking resemblance Linus' blankie in the Peanuts gang. My little brother had "raggies" which gradually got shredded over time from the amount of love they received. My mom had a teddy bear whose nose became flattened from being chewed on. For my son Sammy, it's the one, the only, "Puppy," a stuffed animal-slash-blankie hybrid who has magical calming powers when their noses touch.

If you start early enough, like I did, you may have a chance of actually influencing which object your child falls in love with. For me, all it took was choosing an item and putting it in his crib with him during every nap and bedtime (once he was old enough to safely sleep with blankets/animals of course). Here are a few things I considered when choosing a comfort item:

1) Cuddly-ness. Probably a no-brainer, but choose something soft. (For some crazy reason it's more comforting to cuddle a teddy bear than a toy monster truck.)

2) Portability. Nobody wants to have to haul around a queen sized afghan everywhere you go to keep your toddler feeling at home, so think about the size. I chose an item that would fit in my bag and be easy for a little one to carry.

3) Replaceability. You'll avoid devastation if you choose something you can replace if lost, or better yet, have two of on hand to begin with. I'm sure many of you moms have experienced the elevated heart rate and terror that runs through your veins when you realize that at some point your child has dropped his or her beloved "___-ie." I've retraced my steps in JoAnn Fabrics to find my son's puppy lying in an aisle. I've also raced back to a mall in the pouring rain and rescued the sopping wet puppy moments before being driven over in the parking lot. After two near losses, I got smart and bought a spare.

I picked up his original velvety soft puppy cuddle toy at a garage sale, brand new with the tag still on it, for $2: 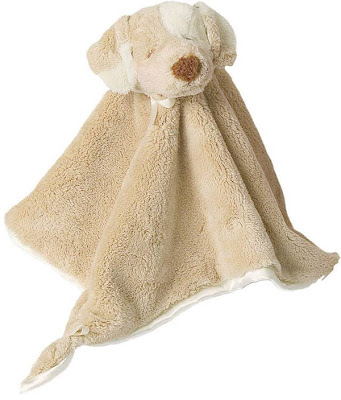 I put this in his crib during every nap and bedtime, and it wasn't long before he had fallen in love with "puppy."

Since then "Puppy" has not only become the single most important item required at nap and bedtime, but a beloved companion wherever we go. Puppy has literally traveled the globe with us. Puppy came along on flights across the US, and has even been to Paris and back. He has a permanent place in my purse (aka "giant mommy bag") whenever we leave the house. He helps owies feel better, he becomes a patient when the toy doctor kit comes out, and he takes all the scariness out of new places and situations.

When he was littler, I'd clip his Nuk right onto Puppy for the ultimate calming duo. You'd think I soaked the thing in ether the way his breathing slows and eyes roll back in his head the moment he touches Puppy's nose to his own and sniffs the familiar and magical smell. Here are just a few recent photos of Puppy's adventures with Sammy: 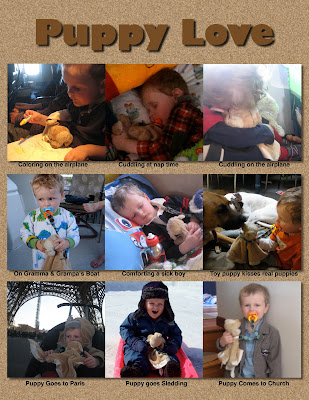 Luckily I was able to look these guys up online from the name on the tag, and purchased a backup. They are made by Douglas, and are called "cuddlers." Purchasing a second was a great move for a couple reasons:

1) if, God forbid he ever were to get lost, we'd have a backup. I always pack him in my suitcase if we go out of town, as being away from home without Puppy would just be sad. But, to prevent loss on our trip to Europe, I tied one end of a shoelace around Puppy's neck, and the other end to the stroller.

And 2), I can actually keep Puppy somewhat clean. When he starts to get crusty, I sneak into Sammy's bedroom after he's asleep, replace one puppy with another, and toss him in the wash. The key to having two though, is to never let your little one see that you have a spare, and to make sure they wear at about the same rate so they don't get suspicious. This is why it's a good idea to have two of them early on, to wear out evenly.

The folks at Douglas Toys know the importance of comfort items and are smart enough to offer 10% off if you purchase two. So, when I wanted to find useful Easter basket items for my youngest son Toby this year, I went straight to their website and purchased two of their monkey "snugglers," so that he'll have his own. Hopefully my tactics will work and he'll also fall in love with one!

I'd highly recommend the Douglas Snugglers as a great item for your own child or as a baby gift. Now, if only I could have this much influence on which girls my boys fall in love with down the road, I'll be set!

Here are a few related articles online...feel free to post comments if you find your own links to related articles or objects your child loves!
Security & Comfort Objects from About.com
"Loving the Lovey" from BabiesToday
"Security Blankets" from Psychology Today
Posted by Gretchen Fleener at 10:39 PM