IDMommy Tip: Use QR Codes to Share Recipes at Parties! 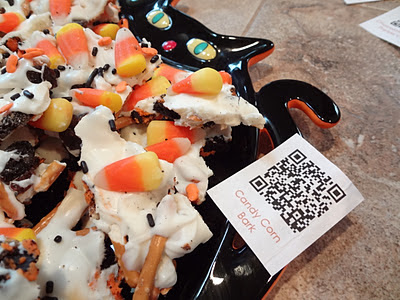 Here's a fun idea I came up with about an hour before we were to have some guests over for BBQ last night...using QR codes to share recipes!

We do a lot of entertaining, and there are always a few people who ask for recipes.  So, I figured, rather than digging them out and making my guests copy them down, leaving the party to go make a copy in my studio, or trying to remember who to email them to afterwards, I'd give this a try!

All I did was Google "QR Code Generator" and there are many sites that will generate the code for you.  QR Stuff was the site I used.  Since most of my recipes were already online, either found on Allrecipes or via Pinterest links, I simply found the links to those recipes and generated a code that takes you to that website.  Then I downloaded the code, pasted it in Photoshop, and printed them out with the names underneath them.  I cut them out and taped them by each dish.  (You could just print these and leave off the recipe title too, skipping the whole Photoshop thing)

There were a couple recipes that were not online, just from my recipe box.  So, I chose the "plain text" option.  I still haven't even tried that one out so I'm not sure how it reacted on people's smart phones.  But, it was a really fun idea to try out and a great way to easily share recipes!!
Posted by Gretchen Fleener at 2:10 PM