Sammy wanted to be Clifford, and since I found I could buy a like-new costume on ebay for less than I could buy the material, I didn't make his.  But, I did make the little yellow tag that says "Clifford" as it really needed that!  I just used two pieces of yellow felt sandwiched together and sewn on the edges, then wrote the letters with black fabric paint. 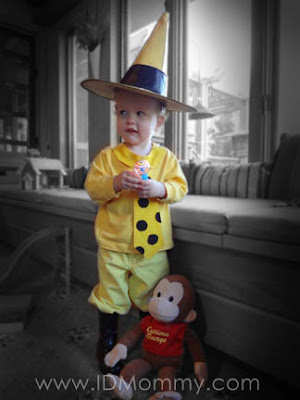 Toby loves Curious George, so I had fun dressing him as the Man in the Yellow Hat!  I got a new witch hat at the thrift store, spray painted it yellow, and added a band around it with some black vinyl I had in my studio.  The boots, pants, shirt and belt were also from the thrift store.  I had to take a couple trips to find yellow pants but found some!  I did have to make them shorter and smaller around the waist though as they were too big.  For his belt (which you can't see here) I just got an adult sized black belt, cut it shorter, and punched new holes in it to fit him.  The yellow shirt had a couple blue stripes sewn across it, which I removed with a seam ripper. 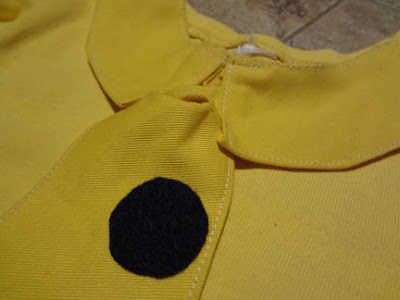 Here's a close-up of the little bit of sewing I did on the shirt.  I just made a fake collar on the front and a little tie, an then glued some black felt polka dots on it.  It came out okay!  I couldn't find a yellow tie anywhere so this worked.  I just cut the shapes, folded the edges in and ironed them, then sew the edges and voila! Faked dress shirt and tie!

We did our pumpkins this morning so I'll have to share pics of those too... 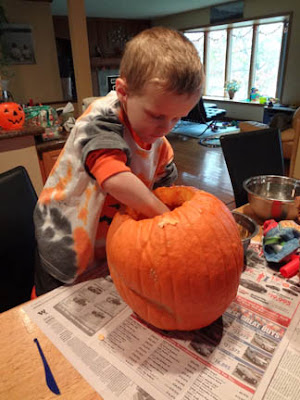 Sammy isn't too interested in getting dirty so I scraped the insides loose and he helped scoop the guts out into a bowl. That was about the extent of his interest in pumpkin carving this year so I pretty much did all the work, which is fine, because I love carving pumpkins! 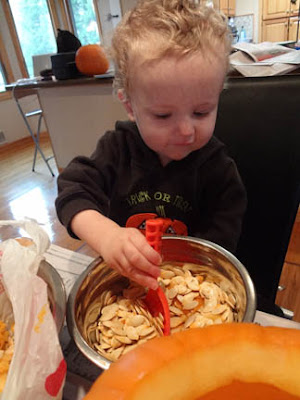 We saved a bowl full of seeds to roast later.  You can find a recipe on my Junk Mail Gems blog here, as well as instructions and recipes to turn your pumpkin into pie and bread after Halloween. 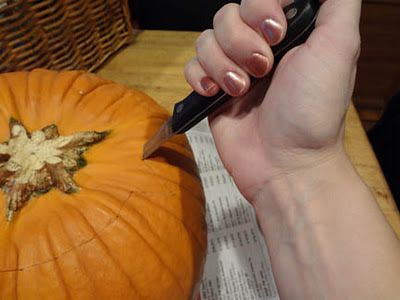 If you're new to pumpkin carving, here are a few tips...
1) as shown above, don't just cut a circle, put a "V" shape somewhere around your circle.  This will help you line the lid up perfectly every time when you cover it.  Little trick I learned from my dad!
2) Cut at an angle as shown above.  If you cut straight, your lid won't sit on top; it'll fall inside!
3) Make sure you cut the hole big enough for your hand to get in, and more importantly, out of the pumpkin to clean it out!
So, Here's what I did this year...
Toby loves George, as we've established earlier, so I made him a George pumpkin! I was gonna just do a face, but found this image of George floating away on his kite on a Google image search and liked it.  I used some brown acrylic paint and a sharpie for the black. 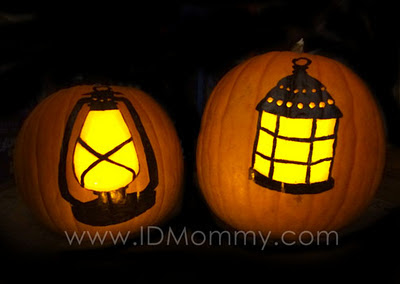 I can take NO credit for this great lantern design idea...I found it on Pinterest! The original link can be found here, on Country Living.  Such a fun idea.  I didn't use their templates but they are easy enough! I used a drill for the little holes and a permanent marker for the black.  Much simpler than they look. 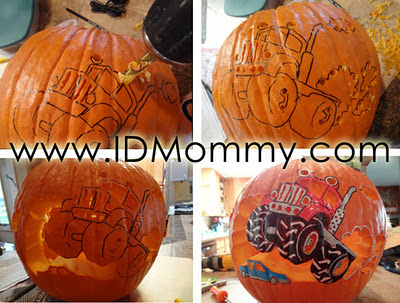 And last but certainly not least, the semi-truck monster truck pumpkin!  Sammy is currently obsessed with monster trucks, and wanted a monster truck pumpkin.  We scrolled through images of monster trucks on the web and chose this one that looks like a big rig.  I think my new favorite pumpkin carving tool is my cordless drill!  I used it for all the round lights, and also for the corners of all the spots I cut out.  I used some paint pens for the color and the metallic silver, which worked great! 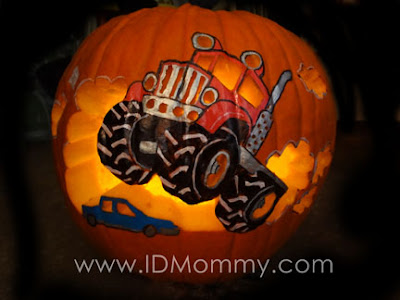 After a little pumpkin carving, fun with Play Doh, and playing in the yard, we had lunch.  I made some "super special cheesy Halloween toast"... 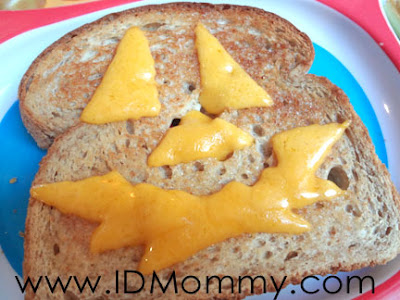 So, that's our day so far!  The boys are resting up now so they'll have lots of energy to go trick-or-treating with Daddy after supper!
Hope you and your family have a fun and safe Halloween!!
Posted by Gretchen Fleener at 3:07 PM