What do you do when you need a quick snack for your kids? While my growing boys seem to be in a perpetual state of hunger, we generally stick to our schedule of one morning snack (between breakfast and lunch) and one afternoon snack (between nap and dinner).  If you're like me, even with just two snack times per day, you can burn through a lot of snacks in a week, and a lot of money too if you're buying goldfish crackers and teddy grahams. 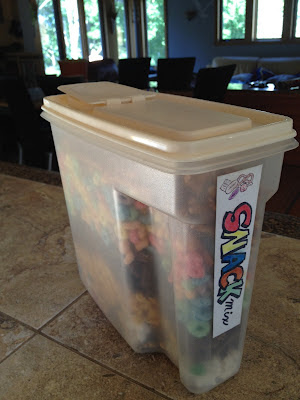 Contrary to what the folks at Pepperidge Farms and Nabisco may lead you to believe, your kids' snacks don't actually HAVE to be shaped like cute little animals. Here's what we now do.  I have one of those Rubbermaid containers with a pour spout (got at thrift stores of course), and I made a "snack mix" label for the side.  This thing gets filled to the top at least once a week with  a random assortment of stuff we have around the house.

Here are some of our regular snack mix components:

- Pretzels
- Cereal (Froot Loops, Chex, Kix, Cheerios, you name it)
- Raisins (Whenever Walgreens has the big cans on sale for $1.99 I buy the limit!)
- Crackers (Goldfish, cheese-its, etc...CVS sells jars of mini Ritz-like crackers for $0.99!)
- Popcorn (Kids won't let me visit our local hardware store without the free bags of popcorn)
- Peanuts
- Dried fruit (okay, same as raisins, but Walgreens sells "Nice" dried fruit mixes w/o raisins)
I never pay more than $2 for a box of cereal with my couponing.  Usually I pay around $1.50 for a box, which is much less than the tiny bag of goldfish crackers.  Teddy Grahams are cute but expensive...you can get the same taste by throwing in some Golden Grahams cereal or even broken up actual graham crackers.  I usually have a few that come broken when we buy them for smores, so they go into the snack mix bin as well.  And I know there are much healthier things out there too that our kids snack on, like baby carrots and fruit!  But, when you just need a dry snack that's easy to transport and grab in a second, this works great.

Once the "bin" runs out, I dump in some more stuff and shake it around.  Even if you do get the expensive just-for-kid snacks, you can stretch them much farther with cereal this way. Often times I'll save certain kinds of cereal for just the snack mix that week, so they aren't eating the same thing for breakfast as they are for snack. Sometimes we'll splurge with a little bit of Cookie Crisp, Krave (the chocoalte cereal shown in the photo above), or even a few chocolate chips or fruit snacks for a REALLY special treat.

It's never the same twice, which keeps the kids interested!
Posted by Gretchen Fleener at 8:52 AM