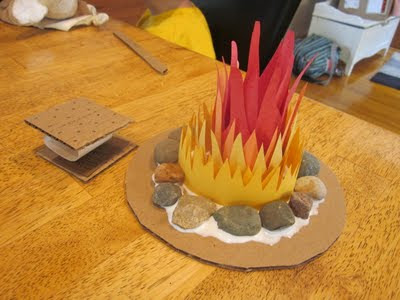 This idea totally came from Sammy.  He thought of the idea of making paper smores while we were making paper garland.  And since I had just finished telling him that we could make ANYTHING out of paper, we had no choice but to do it! 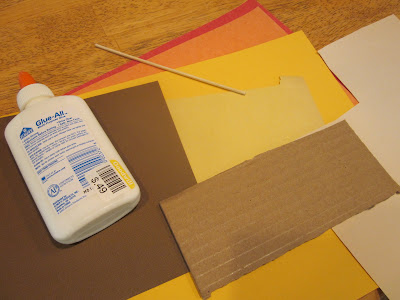 We started with the paper smores.  I got out some graham crackers for reference. 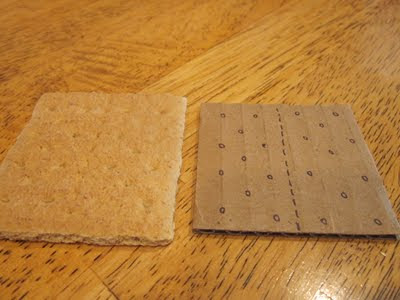 We used the corrugated cardboard for the crackers because it has more rigidity and thickness than just paper.  Cut two squares and use a pen to add the perforated line and little holes for some realism! 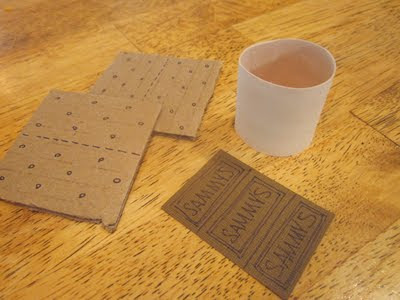 Then we just took a strip of white paper to make a marshmallow, and a piece of brown paper for the chocolate.  This, of course, is "Sammy's" brand chocolate. 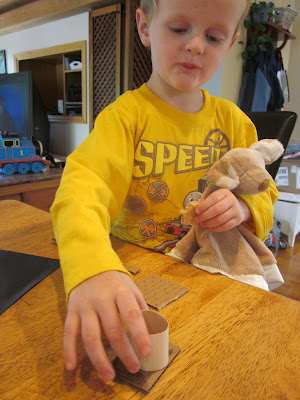 Sammy assembling the s'mores (while eating a graham cracker) 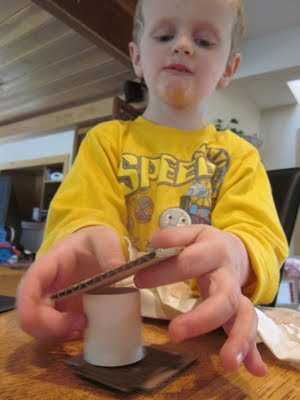 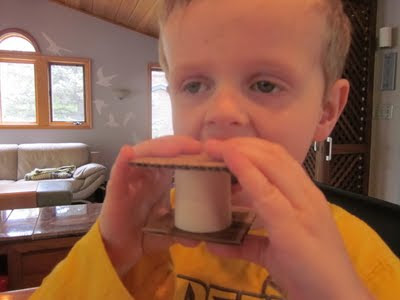 Mmmmm...pretend yummy pretend s'mores!  A little tip...turn the marshmallow on it's side for a more realistic "smoosh" effect when you put the top cracker on! 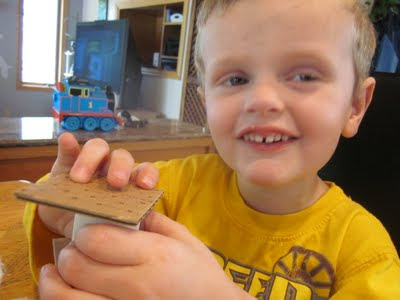 Well, we couldn't just stop at the smores.  Contrary to what some rediculous microwave smores contraption manufacturers lead you to believe, you CANNOT make s'mores without a fire pit.  So, the paper fire pit is up next. 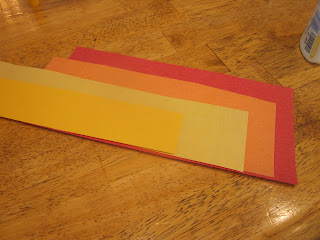 Take some various fire colored shades of paper.  I used red, orange, yellow, and a darker yellow.  Cut them in strips.  The length doesn't matter too much (these are the short length of the paper, 8 1/2" long).  What matters is that the darker color (red) is the thickest strip, and they graduate to the lightest color (yellow) being the thinnest, as you can see above. 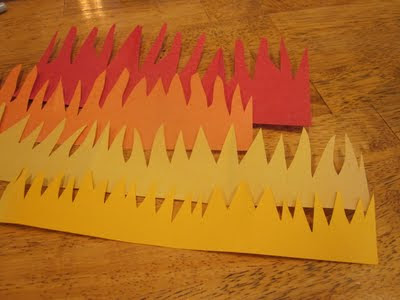 Next, cut some spikey flames on the tops of each piece of paper.  Tip: to speed up this process, fold each strip in thirds or fourths and cut, unfold and the whole piece is done. 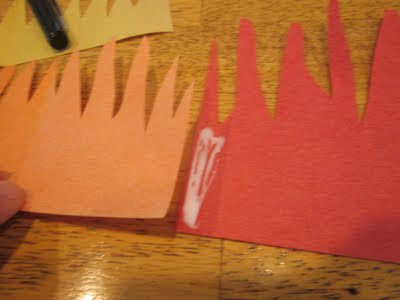 I actually ended up making two of the brightest yellow pieces (the skinnier strips). Next you're going to glue them together, end to end, to form one long piece.  Make sure the flat bottom edges are lined up flush to each other.  Glue them together in order of height, from the tallest down to the shortest flames. 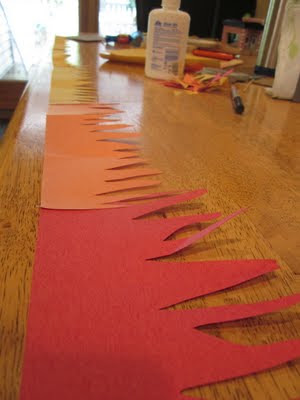 It should look something like this above...a long strip with all of your colors ranging from red to orange to yellow and a common flat baseline.

Next you'll need to get your base ready to glue the fire pit to. 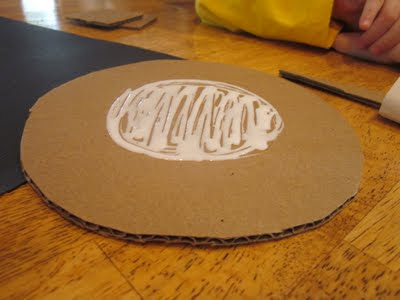 Cut a cardboard circle...ours is about 6 or 7" in diameter. Then make a circle of glue in the center where the fire will stick.  Our glue circle was about 3 1/2" in diameter.

Now to make this thing 3 dimensional! 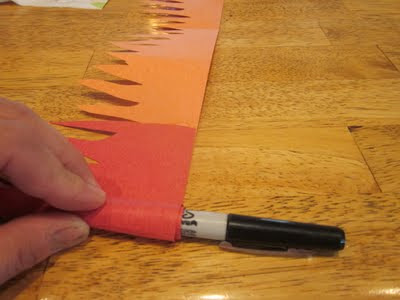 Starting with the red end, roll the entire strip of "fire paper" tightly around a pencil or pen. 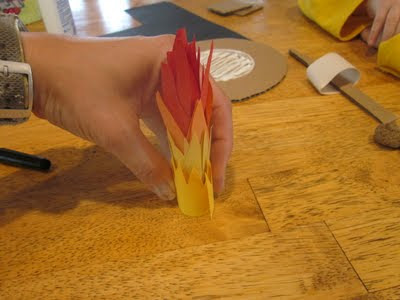 Slide the pencil/pen out while holding the rolled paper together, taking care not to let the whole thing spring loose just yet.

Set it on the table and let go...it'll naturally want to spread out a bit. 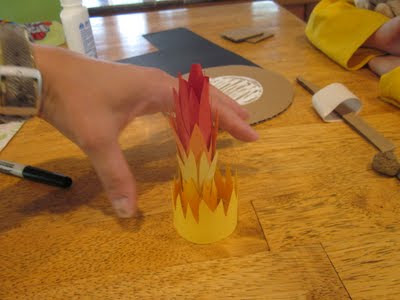 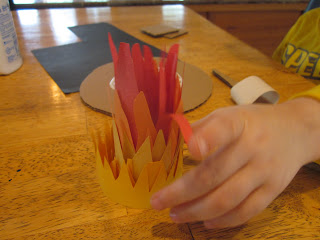 The flames may catch on each other a bit so play with it a little to get it to spread out to your desired width.  Then, pick it up carefully.  Squeeze it tight if you have to, to keep it from slipping apart.  If it does, no worries, just roll it up again. 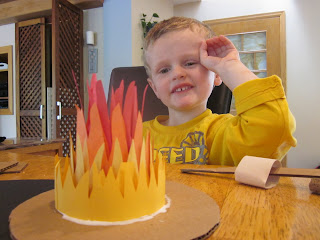 Carefully set it on top of your glue circle on the base.  Then you can fine tune the width and the positioning of the flames.

While the glue is drying you can go gather some rocks. 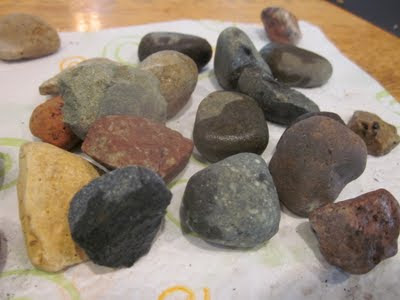 We picked some small ones out of the landscaping in the front yard.  You could use marbles too, or even make paper rocks too...cut circles, or crinkle up some scrap paper into little balls! 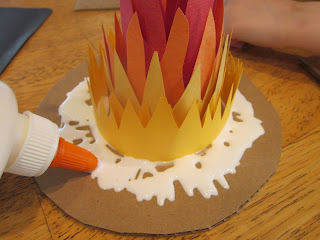 Now squeeze some more glue around the fire where you want the rocks to go. 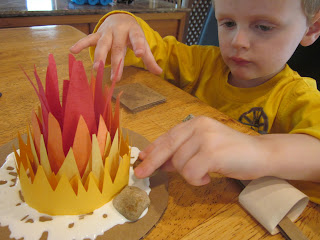 Stick the rocks into the glue around the fire pit! 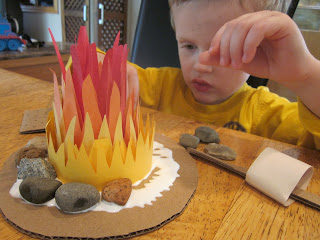 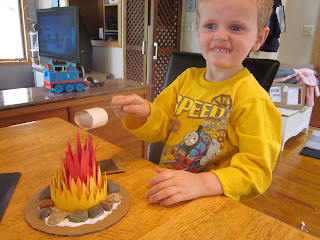 Sammy picked up a little scrap strip of cardboard and put his marshmallow on it as a roasting stick! Now that's my creative little guy. 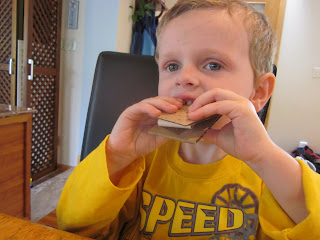 Now enjoy your fat free, calorie free s'mores!  Here Sammy is trying the "smooshing position" of the marshmallow on it's side. ;-) Very authentic part of the s'mores experience.

After we were done he requested that I make a paper gazebo (since we have a fire pit in the center of our gazebo), but unfortunately Mommy was tired it was Sammy's nap time so we didn't get to that part.
Posted by Gretchen Fleener at 3:25 PM