You may have noticed I haven't posted in a while.  The reason is two-fold...one, I was out of town for a week visiting my in-laws in Arizona.  Two...I broke my wrist just hours before hopping on the plane.  So, not only have I been absent, but the splint I was wearing made typing (one handed hunt & peck) painfully. slow. 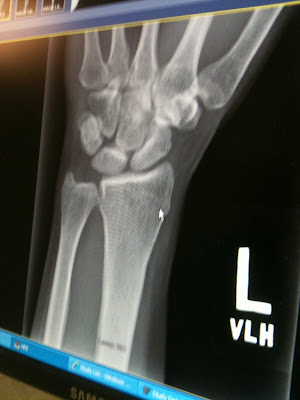 What happened? Well, it was a glamorous story really...it was Memorial day, and I was taking out the garbage. Let's just say that traction-less flip-flops don't mix well with a smooth, concrete garage floor that has been wet by rainfall.   I'm sure I was a sight to see, my legs flying out from under me, landing on my wrist (left, thank goodness) and screaming in pain.  My first instinct was to not act TOO horribly injured, so as not to freak out my kiddos.

I could still wiggle my fingers but wasn't sure if it was broken or just really, really, REALLY, really hurt.  I moaned and groaned around the house for about an hour, teetering between the options of racing to the ER and hoping we still make our flight, or just swinging by Walgreens on the way to the airport, picking up a wrist brace, and dealing with the whole thing out in Arizona.  Being that our crappy insurance requires we pay 100% of ER visits, you can see why I didn't want to chance a trip there just to be told it was sprained, and then be handed the same brace I could have gotten at Walgreens for a fraction of the cost.  But, after an hour of ice and still wanting to throw up ever time I moved a molecule, we packed up the kids, two Lunchables, and headed for the hospital.


To make a long story slightly less long, I got a splint and a sling, and we made it on our flights, with instructions to visit the doctor for a cast upon our return a week later. 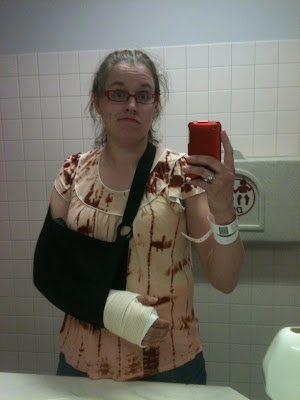 Let me tell you though, traveling with two toddlers, 8 pieces of baggage, one grumpy husband, and a cast that needed a special TSA inspection was no picnic.  But, we made it through, and even managed to create some great memories and photos. 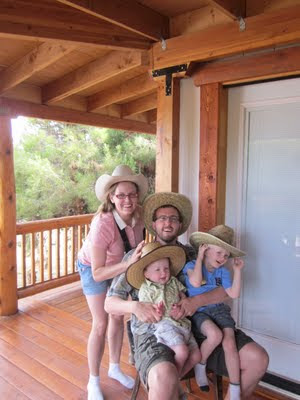 All in all, I am very thankful for a few things... 1) that it was my wrist and not one of my kids', 2) it was my LEFT wrist and not my right, and 3) it happened while I had my husband around 24 hours a day for a week.  (And here I thought changing a poopy diaper on my wiggly 17 month old was hard with TWO hands!) 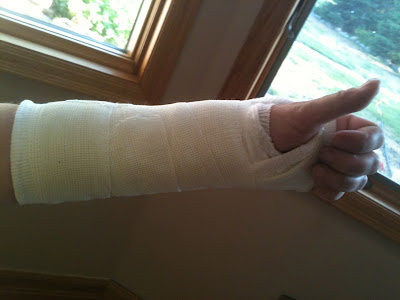 I am happy to announce that as of yesterday, I have a new cast which allows me to use my fingers.  Imagine my joy when I was finally able to shave my right armpit again!! However, I still have yet to gain the strength to hook my own bra on in the morning.  My husband did not like doing my ponytail for me (way too girly!), however, for some odd reason doesn't seem to complain about "hooking me up" every morning.  Now, what to do when he leaves town this weekend...go bra-less, or keep it on until he returns? I'm frankly not excited about either option. 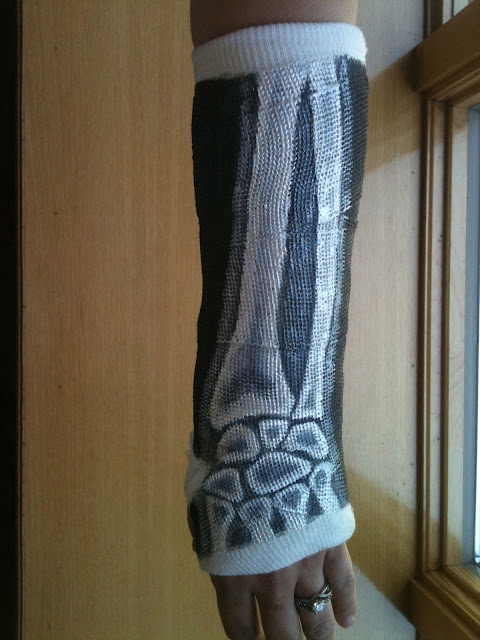 I told Sammy he could help me paint my cast, and I decided to go with this x-ray view of my arm/wrist.  We did it with acrylic paint, and I used a little iridescent paint for some shimmer.  Now I can point out exactly where my break is! And when people ask me what I did, I can tell them I stepped on it, and have fun seeing their reaction.  For now, my designer head is FULL of ideas to improve the design of arm slings, so if any manufacturers out there are looking for someone to improve their product, contact me!!
Posted by Gretchen Fleener at 3:30 PM