Yesterday, during a record-breaking wind storm in our area, we lost our power at 2:00 am.  With over a hundred flights to Minneapolis canceled, my husband was stranded in Detroit, so I was "home alone." Let's just say I slept extremely "light" that night, subconsciously straining to hear Toby's 4:30 cry for food from upstairs through howling winds and debris hitting the windows, since the monitors were not working! Sammy was a little freaked out when he learned that the lights wouldn't turn on, so I promised him we'd go to Target and get a cool new flashlight.

We spent the morning in between waking up and picking up Daddy at the airport going to various places with heat and electricity...first to Target to get some flash lights, baby food and breakfast since I didn't want to open our frig, then a race to the pediatrician for Toby's 9 month appointment.  I wasn't prepared for Sammy to also have two shots that he needed (by "unprepared" of course I mean having left the all important "Puppy" in the car).  It was a challenge to say the least, comforting two little boys who had each gotten two shots, with no comfort items!  Eeek!  Thankfully my ipod loaded with Thomas cartoons and a couple stickers from the doctor calmed Sammy down, who was more upset about the shots than Toby.  Then we were off to the Mall of America where we stopped in the Apple store for a surprise visit with Sammy's cool Apple Specialist Gramma!  I borrowed some electricity in an outlet in the hallway to re-charge my iPhone a little while feeding Toby some breakfast in the stroller.  Then, off to the airport to pick up Daddy who had finally been able to make it home on his 4th flight attempt...all of this done by 10:30 am!  It was a full morning to say the least!

My husband drove us home and headed to work.  We decided to stick around home since it was still 65 degrees inside (cold, windy, and snowflakes falling outside), so the boys could nap in their own beds.  We had some "analog fun" without electricity between then and nap time...

It was a struggle between having fun with flashlights and conserving the batteries in case we needed them when it actually got dark.  But, they were NEW and AWESOME and we just HAD to play with them!

Here we are clearly trying to see how many battery powered devices we can use at one time: 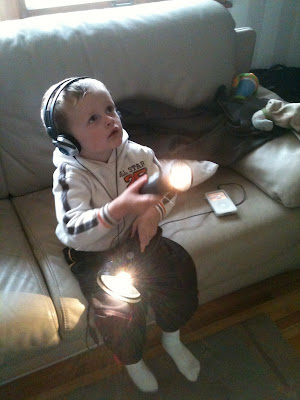 Sammy wanted to cut some paper so we spread out on the floor and made paper Thomas engines.  Here he is helping glue the wheels on Gordon: 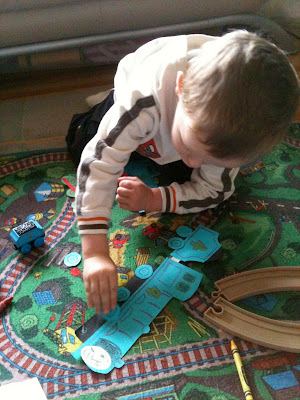 More flashlight fun.  I had just read some magazine article about how you can help teach hand-eye coordination by having your kid point the flashlight at things.  So, I named things around the house up high or across the room for him to shine his light on: 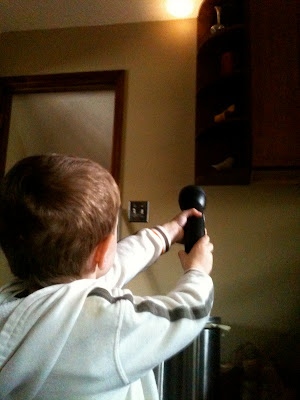 Somehow every game comes back to belly buttons...we shone it on each others' of course... 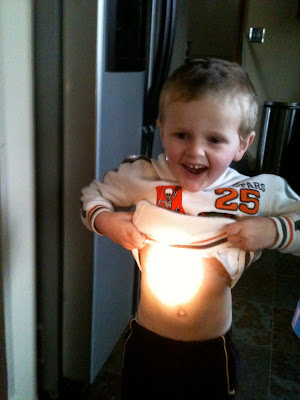 I was afraid that after this morning's painful shots Sammy wouldn't enjoy his doctor kit so much.  However, it wasn't long before I heard "doctor me, Momma!"  He even "doctor'ed" his new paper engines: 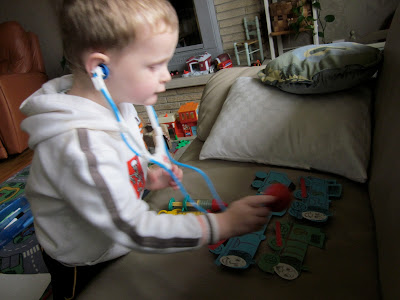 I did notice that when he gave me shots he pushed as hard as he could this time....he must have made the connection that shots are supposed to hurt!

We all sat on the floor in the basement and made a nice big mess playing with toys... 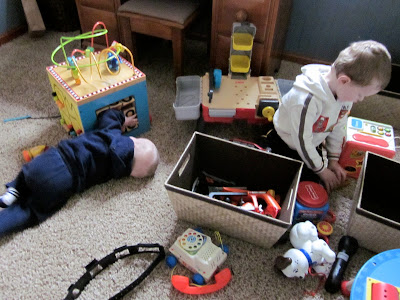 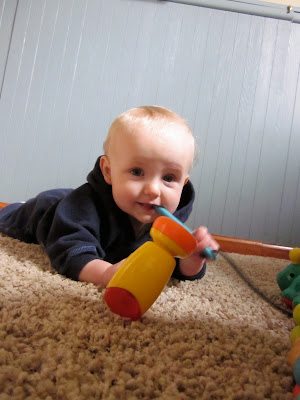 We rolled the ball back and fourth... 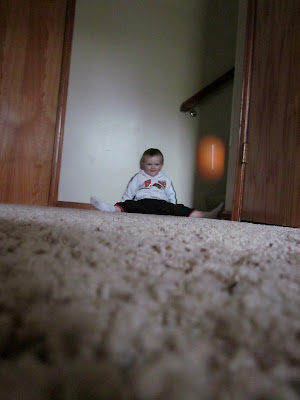 ...and got good and worn out by nap time!  I got them all tucked in and less than 5 minutes later, the power came back on!  It was quite a relief as we lose our power during just about every major storm, one time for 4 days.  So, 11 hours without power was a short stint for us.

So, that is how we spend our power-less stretch!  While I had a TON to do this week, it was a bit of a blessing in disguise to be forced to stay away from my computer for a while and just focus on keeping the kids' minds off the fact that we had no power! Hooray for forced, electricity-free family fun!

Posted by Gretchen Fleener at 10:31 AM