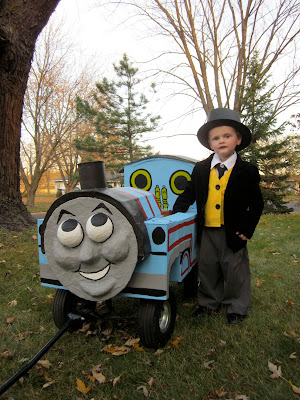 There are a lot of cheesy store bought Thomas costumes out there that try to make the kid look like Thomas.  But, since my husband pulls our 2 yr old around in the wagon when he trick-or-treats, I thought it made more sense to dress him as a person (Sir Topham Hatt) and dress the WAGON as Thomas.  Here's how I did it!
Making Sir Topham Hatt
The Sir Topham Hatt costume was really just a matter of finding the right color pieces.  I pulled together a white dress shirt, a black velvet suit coat, and gray dress pants from garage sales and thrift stores for about $7 for everything.  The top hat I found at a Michael's craft store for $4.  Finding a bright yellow vest was the tricky part.  I was planning to find some yellow piece of clothing at a thrift store and use one of his current suit vests as a "template" to make one. 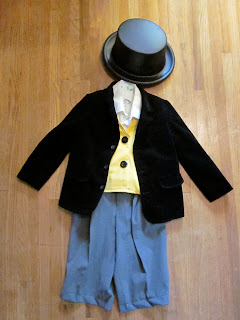 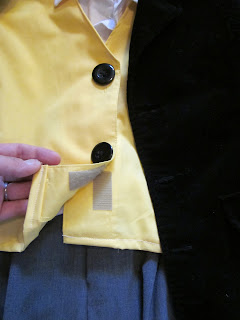 I ended up buying a sleeveless women's button-down blouse and altering it. I turned it inside out and put it on Sammy, and pinned in the sides and the shoulders to make it fit.  Then I just chopped off the collar, ironed and sewed seams on the neckline and waist, and boom...vest.  I cut off the buttons and sewed on giant black ones, with some iron-on velcro underneath.  So, the velcro actually holds the thing shut, so I didn't have to make new button holes. 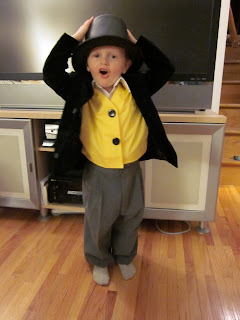 I did have to shorten the pants a little, because I couldn't find gray ones in his size, but that was a quick and easy fix.  I found a black men's tie for $2 and a pair of black leather penny loafers for $3 to complete the costume.  (I shortened the tie as well...just with scissors and glue)

I think it turned out pretty good for only $16.00, and what mother doesn't want to see her little boy dressed up in a suit and top hat?!!  He was a dashing young fellow if I may say so myself.
Making Thomas the Tank Engine 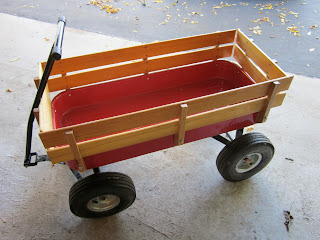 Since Sammy was going to ride around in a wagon anyway, I figured, why not turn it into Thomas?  It would be way more fun to RIDE Thomas than dress like him.  I wanted this thing to really look like Thomas, but then be easily removed when we want it to go back to a wagon.  I'm afraid he may want this wagon to stay dressed as Thomas forever though... 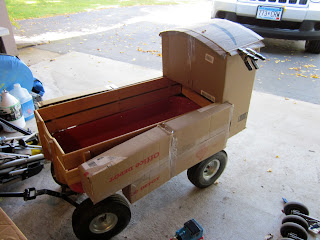 I used a mix of cardboard boxes in the garage, of which we have plenty since we're packing to move.  I used my x-acto knife, school glue and mailing tape to build a back and sides.  I tried not to intrude on the inside of the wagon too much, to ensure there would be enough room for little Sir Topham Hatt to get in and out.  The two sides are glued to a flap on the back box, so they can flex and spread apart, and the whole thing can slide back off of the wagon in one piece. 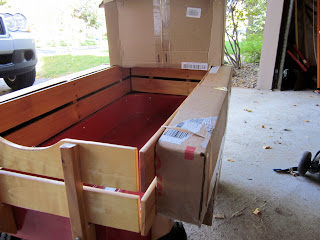 There is a cutout in the back box, so it slides over the back of the wagon just a little bit and sits on the wagon's sides.  The side "wings" are then held against the sides of the wagon with simple rubber bands (above). 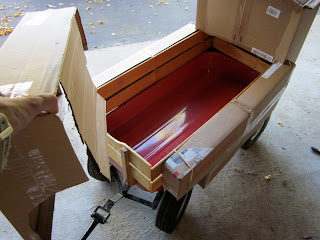 Next, I made a front piece that slides over the top of the front, with cutouts that fit like a puzzle. 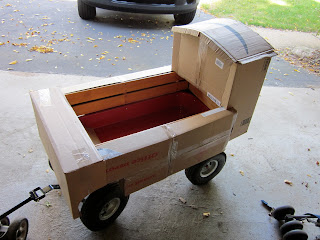 This piece stays on purely by friction and gravity, holds the sides against the wagon, and covers the rubber bands. 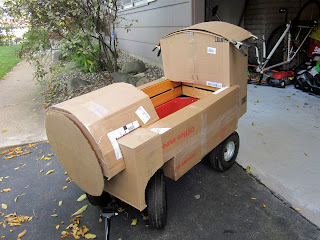 Next I made the third piece of the puzzle...the rounded face.  The cutout fits over the front box, holding it into place against the wagon, and the cardboard that tucks inside the wagon then has a 90 degree bend, where it slips in between the wood side rungs of the wagon, locking the entire thing into place.  No glue or fasteners required to put it together and take it apart! After this photo I taped an old food canister on top of the round part for the smoke stack.  ( or "smoke stash" as Sammy calls it) 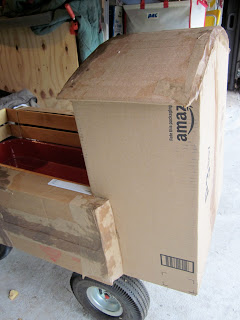 Next I cooked up some homemade paper mache paste, (just flour and water on the stove top) and layered some brown packing paper over all of the seams and on top of all the mailing tape.  I didn't want the paint job to be chipping off of the smooth, shiny tape.  This way the entire surface is paper/cardboard, so the paint will look consistent. 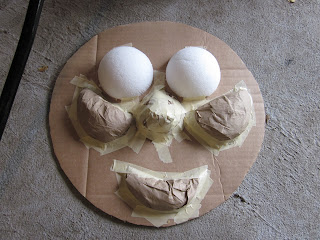 I popped off the front circle and decided to make a 3-dimensional Thomas face to glue back on later.  To do the eyes, I cut a Styrofoam ball in half.  The nose, cheeks, and chin are crumpled up paper, taped into the shapes I wanted. 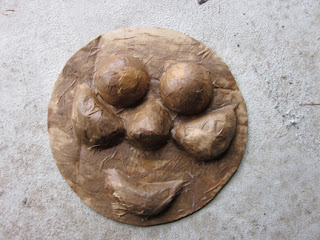 Next I made some paper mache paste from flour and water and covered everything.  After this point, my dogs got into the garage when I wasn't there, ate all the paste and shredded the face.  So, this photo above is the 2nd time around! 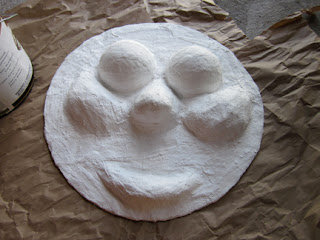 Back to the face... I didn't like that the cheeks and chin were still so flexible, and didn't want paint chipping off if it got squished.  So, I took some plaster cloth that I had on hand from previous projects and put a layer of that over the whole face, which dried nice and hard. 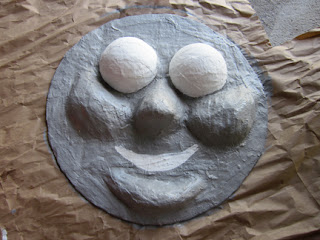 I used some gray paint left-over from painting a wall in our kitchen, and some white for the eyes and mouth. 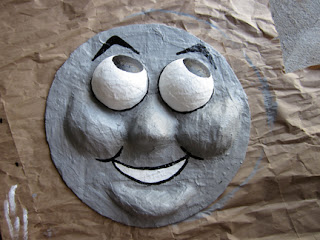 The black paint really made it look like Thomas! 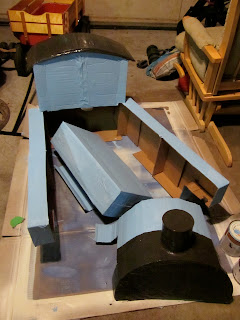 The next time my husband went to Home Depot, I sent one of Sammy's toy Thomas trains with him so he could pick out a matching swatch of blue and get me a little can of "Thomas blue" paint.  I used that to cover the body, and had some really dark gray from a previous project to paint the roof and the front end. 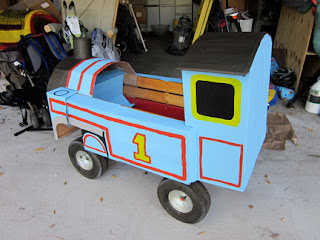 The other colored accents were what really made it "Thomas!"  I added some red stripes, the #1, windows and whistles. 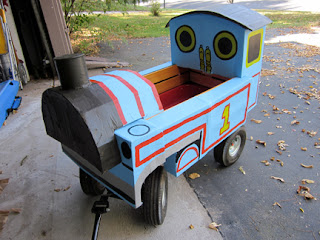 And, finally, I attached the face to the front, added little Sir Topham Hatt, and it was a match made in heaven!  Sammy was pretty thrilled when he stepped outside and saw his very own Thomas in the front yard.  I have a feeling we'll have to keep the wagon dressed up as Thomas for a while now... 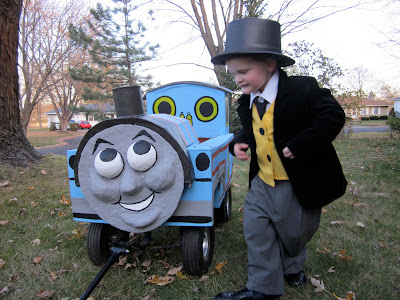 Of course I had to go online and find a few contests for homemade Halloween costumes to enter him in...so here is my shameless plug for votes from one contest!

I hope you and your kids have a fun, safe, and happy Halloween!

Posted by Gretchen Fleener at 1:55 PM