I am a huge bargain shopper, as you surely know if you are a follower of IDMommy.  A bargain to me is when I get something of good quality for a great price...getting more than you paid for.  However, if you aren't careful, sometimes you may just get what you pay for, or wore yet: less.

My little boy is nuts over Thomas.  We have some wooden Thomas engines and have found all of them to be "really useful engines" when it comes to motivation for our potty training efforts.  Wanting to get a good deal, I thought I'd check out ebay for some more engines to help continue to fuel his motivation to ride the "poo poo train."  So, naturally, when I saw a Mavis engine for $6.99 with free shipping, I jumped at the offer. (Mavis 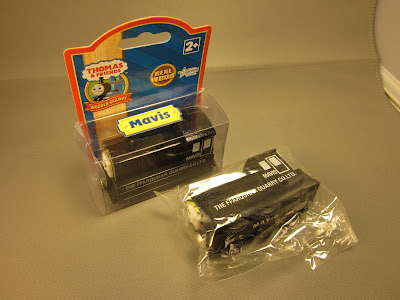 Go With Your Gut.

It was clear to me the minute I opened the padded envelope from Hong Kong that it was a fake.  It was sealed in a crappy plastic bag (above, front).  The wheels were thin, wobbly, and poorly made. It didn't have that quality, heavy weight in my hand of the other engines.  I could see shiny gobs of glue at the seams, and was almost knocked over by the strong smell of paint fumes.  I went online right away and confirmed my suspicions via an ebay forum.  I couldn't find anything explaining how to tell the difference, so I am going to attempt to do just that in today's post.

Perhaps you are thinking, "so what?! My kid can't tell the difference, I saved a ton of money, what's the big deal?" As a product designer myself, I am especially furious when I receive items on ebay that are inferior copies of the original product.  I know how much work goes into designing quality products and finding the right manufacturer to make them in a fashion worth to carry your company's name...not to mention all of the creative and original work that went into the creation and development of the characters themselves. Knowingly funding those who are infringing on copyrighted characters like this is contributing to their act of stealing and making money off of others' talent and hard work.

I went into my ebay account and sent a message to the seller, that went something like this:

"Hello, I just received the Mavis engine and this is clearly a cheap and poorly made knockoff. You are infringing on copyrighted characters by selling these and misrepresenting them in your auction by labeling them as 'Thomas Wooden Railway' engines. I would like my money back immediately or I will be reporting this to ebay and Learning Curve."

Within an hour I had received a notification from Paypal that my purchase had been fully refunded.  Interesting.  They are clearly making SO much money on these fakes from the people they fool, that it's not even worth them arguing to keep my $5 bucks...they'd rather keep me quiet and keep their Ebay feedback positive.  I could not in good conscience give this thing to my kid and support this illegal infringement, not to mention the possibly toxic paint and choking hazards of loose parts.  I sent the same email once I received my fake Gordon engine and also got my money back. I went on Amazon and purchased a legitimate Gordon

for triple the price, and a real Mavis on Ebay.


Warning Signs to Spot a Fake Thomas Engine on Ebay:

After performing a Google search, I found that there is a whole forum on this very topic, ON ebay.
Here is a link to ebay's policy on counterfeit items.

Later I went back and compared the two ebay pages for the real and the fake Mavis engines I bought.  Here are some things I noticed that I will watch for next time. The Price vs Item Location: They list it in Australian dollars, which made me assume it was coming from Australia so I didn't think to look at the item location, which is actually Hong Kong.

Description: In the item specifics, all it says is the condition is new...there is no mention of the brand of the product.  Even though they are illegally using the Thomas name in the product description heading, they probably figure that listing the Learning Curve brand would be going too far.  Also, the ad said that this "Thomas Wooden Railway" engine is compatible with the "take-along series."  The real ones are not compatible both ways.  The ad said it was not in it's original package because it "was part of a larger set" but maintains that the product is still new.

Photo: Compare very closely the photo on the ebay page with one from another site that you know is more legitimate, like a site for a store that has a real physical location too, or a site with a reputation to uphold, like Amazon

, Toys R Us, or Target.  Click on the image to enlarge it and you can SEE the bad quality...

In this photo of the fake you can literally see the GOBS of hot glue oozing out of the seams.  They didn't even bother to pick one the looked decent for photos. The 3D plastic face glued on the front does not match an authentic one, nor do the yellow and black stripes painted on the front.  Look at the wheels too.  They have ridges on the fake one...real ones do not.  The fake has a little rounded bump for the smoke stack, while the real one is taller.  These are things you don't notice while browsing ads, but when you put them side by side, you can tell that the differences are clear. 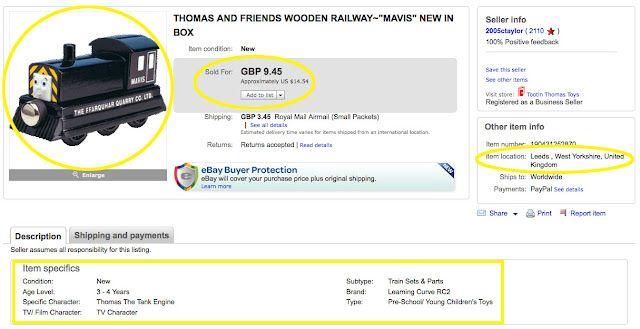 The Price vs Item Location: The currency listed, GBP, matches up with the item location, the United Kingdom. Doesn't prove it's real, but it was a difference between the two that I noted.

Description: This is listed as "new in box." When you look under "item specifics," they seller has selected the specific character, and has listed the brand as being Learning Curve. Again, something they could theoretically fake, but something the one from Hong Kong didn't even bother to specify.

Photo: You can tell when comparing above that this one is real when compared to the fake, and to another legitimate online retailer.


Warning Signs to Spot a Fake in Physical Form:
There are some things you can't see until you really look at the physical product.  Here are a few things to watch for.

Wheels: If you have the ability to do so, check the insides of the wheels.  Authentic trains should have something like "Gullane (Thomas) Limited" and a date in raised letters. 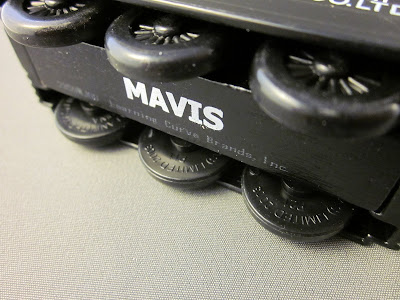 Branding: In addition to the engine's name, most of the real ones have the "Learning Curve" brand and an item number painted on the bottom. 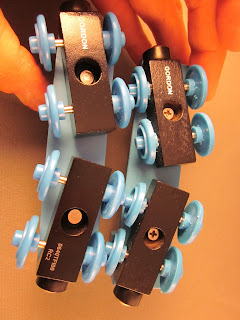 Construction: Above is a photo of the real (left) and fake (right) Gordon engines that I ordered.  The fake ones just stick a phillips head screw in the bottom to attach the two wheel blocks, while the real ones has a smooth, finished piece of hardware.  You can see the item number on the real one as well. The front "face" piece on the fake was already coming loose when it arrived, whereas the real ones are rock solid in their construction.

I'm not an expert on these toys or their manufacturing history.  Some of these little differences could be written off as a result of a change in their manufacturer mid-stream, a change in the design, etc.  But, I think the main thing was that I found enough differences, not only in the look of things but in their quality, that raised a red flag and enabled me to spot the fake.  Hopefully some of these things will help you as well!

So make sure you do a little research ahead of time, especially when purchasing online, to make sure that you are getting the real thing.  Otherwise, it's the seller who's getting the bargain, not you!
Posted by Gretchen Fleener at 4:08 PM