Well, I'm WAY behind on my blogging, but I thought I'd start catching up by sharing the not one, but TWO Lego themed birthday parties we had in our house, just 1 month apart!  When I heard that both of my boys wanted Lego parties, part of me thought, "great! I can re-use stuff!"  But then the other part still wanted to make each party unique and special in their own way.  So, I did do a mix of recycled decor and new stuff.  So, if you're looking for Lego ideas, you're definitely in the right place...here are TWO parties' worth of ideas!!

Sam's cake I sortof carved out of a sheet cake! I used some extra trimmings to make a couple loose Lego blocks, with matching M&M's on top!

For Toby's cake I decided to make a big Lego head! I just made two bundt cakes, and then realized it wasn't quite tall enough when I stacked them.  Luckily I had an extra sheet cake in the freezer, left over from Sam's birthday the month before (I though I'd need two but didn't).  So, I put a layer of that cake in the middle to give it more height.  Then I filled in the top hole and put a round piece on top to get that interlocking shape!

Our local dollar store didn't have anything Lego related, so I just got some primary colored, blank mylar balloons, and drew faces on the yellow ones! 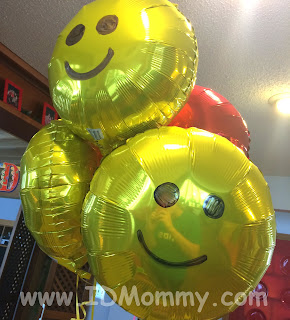 We have these metal beverage tubs that have gotten a ton of mileage at our parties, and always are able to take on the theme of the day! Just some black construction paper turned the yellow one into a Lego face:


I have a sweet friend who gave me her Lego garland pieces, which were designed to hang on a little clothesline.  I taped them around the walls and doors instead, and they looked cute scattered around the house. Here's the front door: 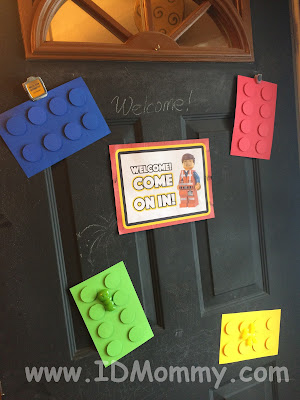 While our dollar store didn't have Lego themed stuff, they did have big sheets of primary colored poster board! I cut and glued together a sheet of red, yellow and blue to make this gigantic Lego man that I stuck to the sliding back door:


I had to make one for Toby too, of course! His is a little shorter but I made him the Lego space man:

For the boys' names I just did a Google image search for "Lego letter T" and so on...printed one out per sheet and spelled their names in Lego!  They are now adorning their bedroom doors. ;-)


I built some plasticware holders using the generic bricks from Target and some of our Duplos:
There really is no need to buy licensed character plates and napkins...just get colors that go with the theme and it all goes great!

The Lego doors were super fun and cheap to do!!!  I did a blue one for one kid and a red one for the other.  This is just a plastic tablecloth and matching paper plates from the dollar store.  The whole thing cost maybe $3 bucks!

I got some fun, colorful candy and treats to put around the party...these fruity Twizzlers were a hit.  I just cut them in half with a pair of kitchen shears to make more, shorter pieces. They looked really cute standing up in this dish: 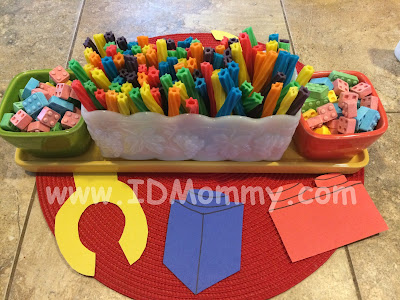 The interlocking Lego candies I got on Amazin, and got enough to have plenty out for both parties.

I found this cute idea somewhere online to make Lego head marshmallow pops! They turned out so cute!! 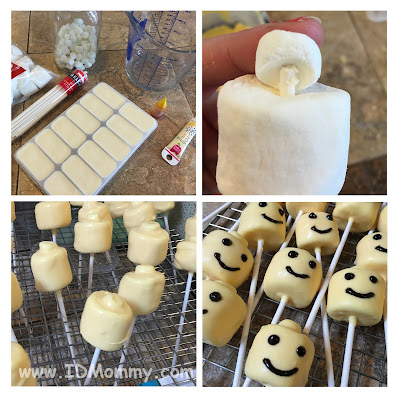 The Lego pops were out for Toby's party. My hubby cut some foam chunks and I stuck them in that, inside little plastic baskets from the dollar store:


I got a set of Lego molds and made some ice cubes in the shapes of minifigures and bricks! These I did for Sam's party but not Toby's...not sure if they were really worth the work.  But now we have molds if we want to make them out of chocolate, or crayons, or whatever...

I made a pull-string pinata for each party.  Sam had a classic Lego brick shape:

Toby really loves the line from the movie, "Honey, where are my pants?"  So, I just had to make a pants shaped pinata for him!! 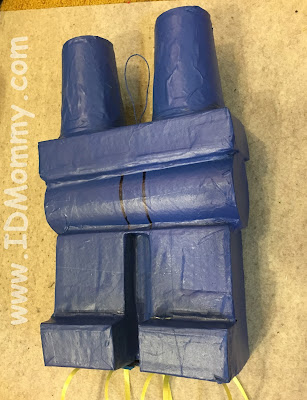 The top parts are just plastic cups glued to the box!  The rest is just made up of cut boxes and tubes.  Then the whole thing is covered with paper mache and painted.

I got some cheap knockoff bricks in Target's dollar section, and those were fun to scatter around for decorations.  The kids had fun building stuff with them too!  Another friend of mine had a bunch of great Lego coloring sheets left over from one of her parties, and we had enough of those to use for both parties too...
Goodie Bags

I usually just use paper lunch bags, and then print out the kids' names on the computer to label them.  For Sam's party the kids got bubbles, pencils, minifigure-shaped crayons, Lego candies, and these suuuper cool notebooks.  The notebooks were also from Target's dollar section, $3 each! Later they sold mini ones for $1 but it was too late for us!  These were really neat though and went over well.

Somehow I ended up with more items in Toby's goodie bags, but there were so many fun things it was hard to choose, ha ha! I got some cool Lego wristbands for Sam's party, as he's a huge wristband collector, but there were only 12 in the pack and he had more kids than that attend.  So, we saved them for Toby's.  The cool stacking crayon/pen things and the round shooters I got at Goodwill! (Brand new donations from Target)  Then I got some fun wallets and keychains (from Oriental Trading), and erasers.  Yeah, I think I went a little overboard on the goodie bags this year...but they were SO FUN!


We had so much fun doing these parties!! I have been hoping for years that the boys would want a Lego theme someday, so you can probably tell I was excited to go overboard, ha ha!

I hope this helps give you some ideas for your own kids' parties!!  Thanks for stopping by and feel free to leave any of your own ideas in the comments!


Posted by Gretchen Fleener at 3:45 PM