We had some fun on St Patrick's day this year! I painted the boys up before they left for school...


Toby had complained of something in his eye that morning and I encouraged him to try to make tears to wash it out.  But, later that day I got a call from the school that he wasn't doing well with his eye and rubbing it a lot.  So, I had to go pick him up and run him to the doc.  They saw some scratching on his eye and gave us drops, which did end up clearing it all up by the next morning.  But, he was SO bummed to miss out on all the St Patrick's day fun at school!!  They always have a mischievous leprechaun visit their classrooms and wreak havoc.  His class had planned to make leprechaun traps that day.  So, in an effort to still make it a fun day, we stopped at Walgreens on the way home to pick up some chocolate coins as "bait," and made our own trap!

Whaddaya know, turns out the leprechaun did end up visiting our house during his nap, leaving evidence all over!

Darn, I knew I shouldn't have left my face paints out on the table...I guess I should have known that a leprechaun couldn't resist a rainbow cake, as he painted all over the windows!! 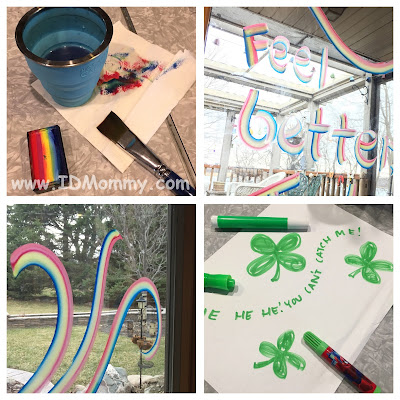 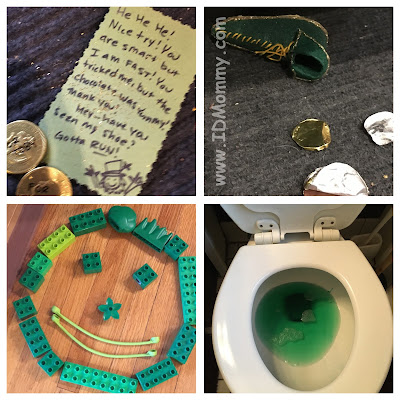 Unfortunately we didn't catch the little bugger, but we did manage to catch his shoe in the trap!!  Toby was pretty excited to bring the shoe back to school the next day to show his friends!

I don't normally plan anything for this holiday, except for wearing green.  But, Toby being stuck at home from school ended up turning it into a fun day!

I already had plans to attend a balloon "jam" (get-together for balloon twisters) that night with my oldest, Sam...so we had a lot of fun that night while Toby got a fun night with Dad!

This year, even though it involved a trip to the pediatrician and pharmacy, and I didn't get ANY work done, it turned out be a great day of one-on-one time with each of my boys!!

Hope you had some fun on St Patrick's day!


Posted by Gretchen Fleener at 4:10 PM