This year my 5 year old requested the green angry bird as his costume!  I was a little worried about how to pull this off but I think it turned out pretty well!  And there isn't a single stitch of sewing! 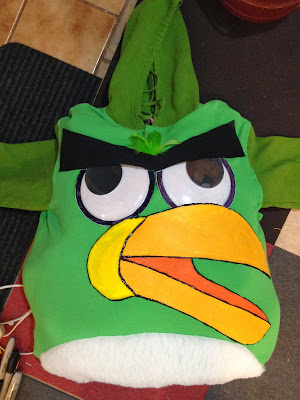 I went thrift store shopping (of course!) and found a green sweatshirt that was his size, and a bright green men's polo shirt.  I then cut the sleeves off of the polo shirt, put it over the kids' size sweatshirt, and then used a glue gun to seal the cut-off polo sleeves and the hem of the polo to the sweatshirt underneath...making sure to stuff it with pillow stuffing between the two shirts before totally sealing it off. 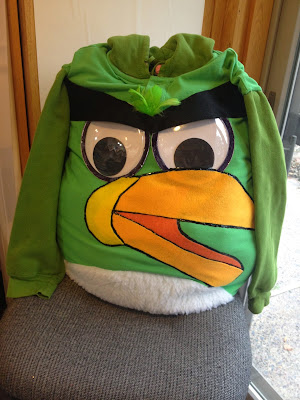 I got a pair of giant google eyes at Michael's for $5 which were awesome!  The eyebrows and beak I cut out of felt and glued on with a glue gun, as well as the furry under belly.  Then I just outlined everything with black t-shirt paints which helped it look really cartoon-y.

I figure that between the sleeves, hood, and pillow stuffing, he should have no problem staying warm while trick-or-treating in Minnesota!  I'll of course paint his face as well because, well, that's what I do.
I used some black felt to cut out and attach the black tuft of hair to his hood, and the tail to the back...
...all glue gun!  I spent maybe $10 on this for the eyes and two shirts...already had the felt, stuffing and glue!

I'll be sure to come back and post a final photo of him in costume on Halloween as I'll have his face painted, but wanted to pass this on for anyone else looking for costume ideas in this final week before Halloween!