As a kid, the house itself, albeit overrun by toys, is a grown-up thing.  The shiniest stuff is always breakable and out of reach. The sink requires a step stool to reach.  The corners of the counters and tables are right at head-banging level.  The doorknobs can lock, but Mom and Dad have a secret key to get any of them open.  So, your only escape from the world of adults is your bedroom...UNLESS, of course, you have a super awesome, secret fort!!
We recently moved, and within a few days of moving in my husband and I noticed that the bottom shelf of one of the built-in shelf units downstairs had a curtain in the back instead of wood.  Upon further investigation, we discovered that this was the entrance to a super-secret fort.  With a spiral staircase, we didn't think to look for a closet underneath like you might with regular stairs. 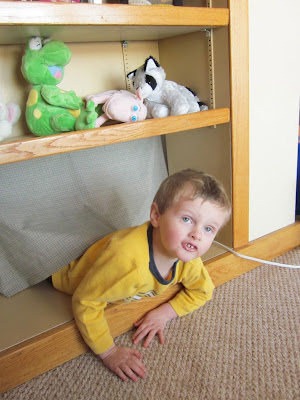 We waited about a week or so before we unveiled the fort to Sammy, our 3 year old.  I wanted to get in there and clean it up, paint it, and make it incredibly awesome for him...or at least give him a jumping-off point to give it his own awesome touch.

It was all pretty brown and dingy, so I took some colorful paint left-over from various home painting projects to brighten it up.  This included the underside of the steps too, of course, and stripes on the vertical ribbed paneling. 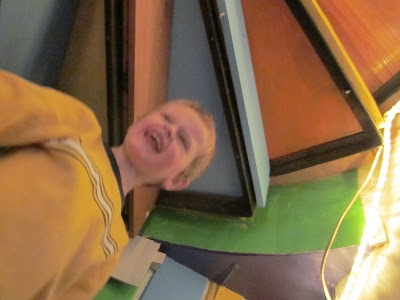 I ran some rope lights around the inside, and plugged them into a little dimmer switch controller, so Sammy could easily turn them on and off. I also hung a couple battery powered push lights on the walls.
During a trip to the fabric store I came across a package of wall "stickers"...little trucks, airplanes, and trains with wallpaper paste on the back.  I scattered these around the inside as well. 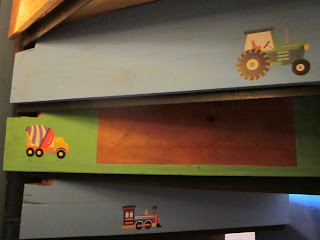 You can see above that I left a rectangle of the wood un-painted on one step.  This spot holds the history of the fort, hand-written with pencil by the kids who came before us.  Here you can find out who originally built the fort, who added decorations, who "was here" on various dates, who painted their toenails in the fort, and even a record of who farted in the fort.  Now how could I have painted over that? We'll add our own history to this little record!
I wanted to reveal the fort to Sammy through a game of hide-and-seek, one of his favorite games that we play almost daily.  He counted with Daddy while Mommy hid, in the fort of course.  Let's just say he was pretty excited to find Mommy in this hiding spot of all hiding spots! 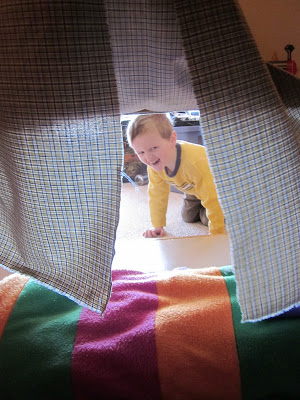 Not long after the reveal of the fort, we took a trip to one of Sammy's favorite stores, Choo Choo Bob's Train Store.  They had a wall of posters for $1.50 so I let him pick one to hang on his fort wall.  Without hesitation he chose this one (above), of "Engineer Emily" from the Choo Choo Bob Show.  As his mom, I'm pretty happy with his choice for his first girl poster. 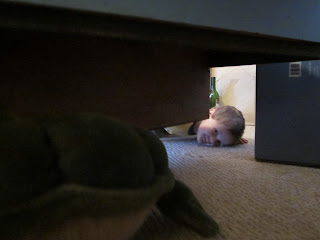 This fort also has a secret 2nd entrance, under the steps in the corner...it's open but you'd never think to look there if you were coming down the stairs. 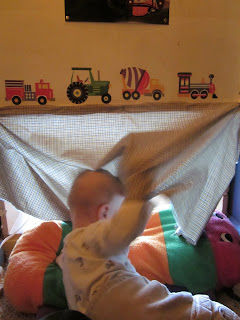 Toby LOVES to play in the fort as well.  For a little guy who isn't quite walking yet, it's pretty exciting to have something so cool that is accessible by crawling!

I'd still like to make a new curtain that blends in more with the shelf to make it even more secret, and maybe add a shelf or two inside for toys.  But, this industrial designer Mommy will try her hardest to refrain from doing too much, so that my boys can do what THEY want with the fort as they get older! (As long as they don't take girlfriends in there!)

Posted by Gretchen Fleener at 9:38 PM