Our little train enthusiast just turned 3!  Here's what I did for his party, in case anyone else out there is looking for ideas for a train themed party.... 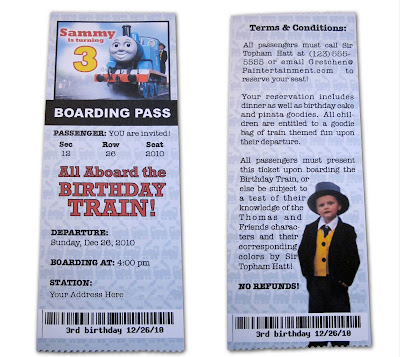 I always have a lot of fun doing the invitations.  For the train theme, I made a boarding pass.  I did a Google image search for some inspiration, looking at boarding passes and similar invitations.  I made a train pattern in the background to look like a watermark.  The top and bottom edges are cut using scrapbooking scissors with a postage stamp edge.  The bar code on the bottom actually does read what it says, "3rd birthday 12/2/610."  I got this by Googling "free upc code generator" and getting a site that generates a bar code for you!  Photos of Sammy in his Halloween costume came in handy for the imagery.  Then I used his birth date for the section, row and seat, the date and time for departure and boarding time, as well as our address for the "station."  I was able to print 3 of these per sheet of letter sized paper, two sided, at home, and they fit perfectly into a standard envelope!

If you've been following this blog over the summer, this may look familiar... 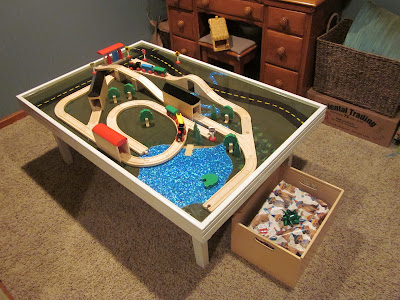 Since the party was a train theme, I thought it was an appropriate time to unveil the train table!! (see how I made it, here)  I set it up in the basement, and we gated everything off to ensure that we wouldn't miss seeing his face when he found it, if he woke up before us.  But, that plan failed, as he climbed onto a chair and over the gate, then popped his little head into our room to tell me that he was playing with his new train table!  I guess when you're 3, you are officially old enough to outsmart Mommy and Daddy! 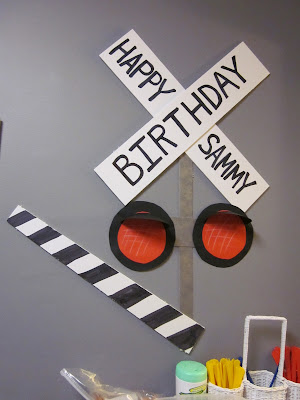 The night before his birthday (which so happens to be Christmas), I realized I didn't really have decorations so I made this sign above with some scrap foam core and construction paper I had in my studio.  I wrote the letters and colored the stripes on the gate arm with a big, black marker, and the rest is colored paper. 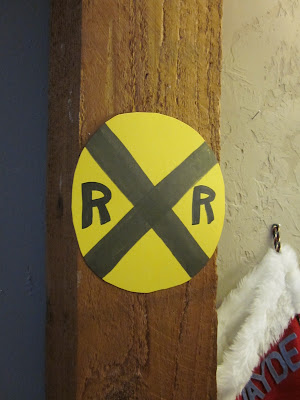 I made a bunch of these little yellow construction paper signs to hang around the house as well! Super easy! 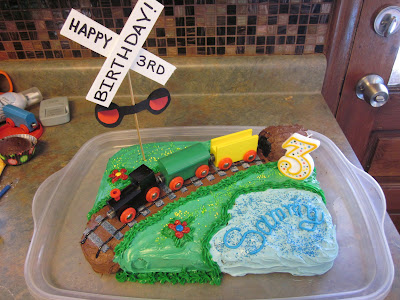 , however, the instructions were WAY off for baking time and the thing sunk in when cooled, as it was still filled with raw batter.  So, I scrapped that idea and started over with a simple 9" x 13" rectangular pan.  I had a couple cupcakes that I made from some of the extra batter from the first cake, and put them together to form the tunnel.  Sammy loves tunnels, and he got to eat that piece! 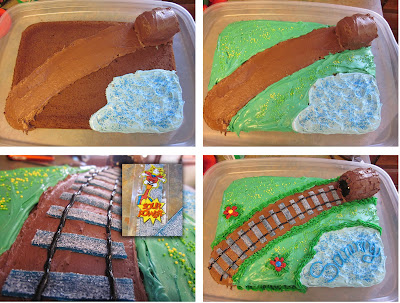 I frosted the tunnel and track location with chocolate, and the rest of the frosting is cream cheese frosting that I dye'd with food coloring.  I put a lake in the corner with some blue sprinkles, then spread on the green grass.  The blue pieces that I used for the railroad ties are made of a candy I found at the party store...blue strips of sour candy (kinda like a cross between a sour patch kid and fruit roll-up).  I cut the strip down the middle and then cut those to make edible tracks.  The rails are applied over the top with some black cake decorating gel.  Then, I added some more sprinkles to the grass, and some flowers.  The flower pedals are red frosting and the centers are mini m&m's.  Then I made a little paper sign to stick in the back and added a few train cars and accessories from his set! 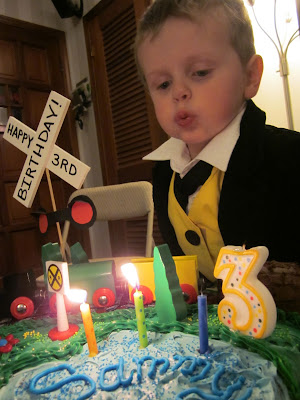 The cake went over well, being a second attempt!  As you can see, we got a little more mileage out of his Halloween costume, dressing him up as Sir Topham Hatt for his party! 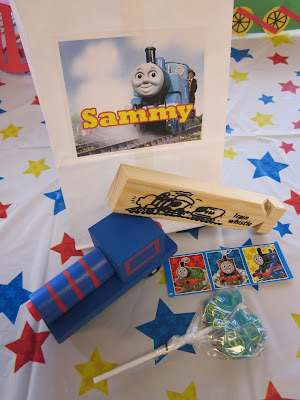 I started collecting party favor bag items months ago.  The wood engines came from the dollar bin section at Target.  I ordered the train whistles and train shaped suckers online, and picked up some Thomas stickers at the party store.  I just used white lunch bags and printed out everyone's name against the invitation image background, using sticker-back paper, to stick to the bags. 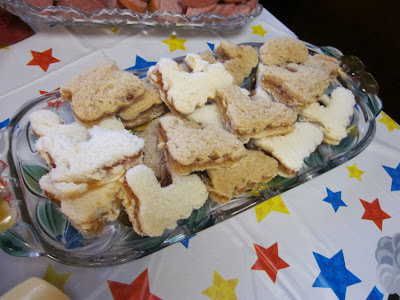 I did a face painting gig this month for a law firm's party, and the caterer's had little peanut butter and jelly sandwiches cut out using mitten shaped cookie cutters for the kids.  I thought that was a fun idea, so I made these little PB&J sandwiches with train cookie cutters!  I thought of the idea a little too late in the game to find a good sized cutter, so I got this little set of 3

at the mall.  It was hard to tell these were trains, but if I did it again I'd take the time to order a larger cutter online.

The rest of the menu included some home made pizza (on pre-made crust dough).  The little sandwiches worked great though to give the kids something to munch on until the pizzas came out of the oven!  We also had cut up grapes (to avoid choking), and other finger-food items like meats, crackers, banana chips, Craisins, juice boxes, etc... 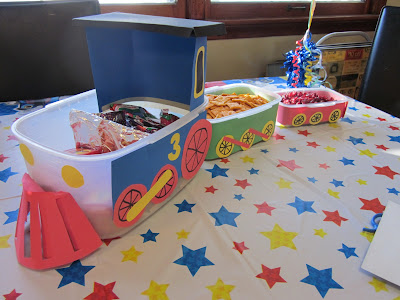 I decorated this set of food containers with some construction paper and put them in a row...voila..."snack train!" The "engine" is divided into two sections, one holding fruit snacks and the other, little boxes of raisins.  The center car has Cheese-it's, and the caboose is full of Craisins.  If you used regular raisins, it would totally look like a coal car!  ;-) 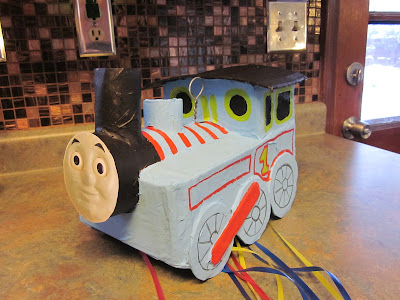 The pinata I started back in the summer, when I already had all of the paper mache supplies and Thomas-blue paint out working on Sammy's Halloween costume.  So, when we got closer to the party, I just had to finish painting it, add the streamers (one lucky streamer opens the door when pulled), and glue a Thomas face on the front that I printed off of the computer.  The center is a mailing tube, so I could easily pop off the face and fill with candy!

I did go to the party store and pick up some balloons and a banner to hang, but had lots of fun making things to go along with this theme!  Sammy had a blast so it was all worth the work!  Next up is Toby's 1st birthday, just a few weeks away.  His theme: Circus!  I'll be sure to post more photos then!

Posted by Gretchen Fleener at 2:08 PM