My big boy just turned 6, and we had an Angry Bird party!  Here are some photos of what we did!

When possible, I like to just make my own decorations and save the cost of licensed character stuff.  I still do buy some things, but sometimes it's almost as easy to make your own....

I got some little individually packaged pouches of Angry Birds cheese nips.  We had them out with the food and also put one in each of the kids' goodie bags.  But the box they came in had lots of pictures of the birds and pigs.  So, I cut them out and used them around the food tables as decorations...
Okay, I know not everyone has the supplies or know-how to make balloon sculptures...but since I started adding balloon twisting to my Paintertainment party services, I had to make a balloon sculpture!
I had purchased the actual character balloons for the red bird and pig, and the the other two latex balloons I just drew faces on with paint pens.  You could easily attach paper eyes and beaks to these too like I did to the beverage tubs.


At all of our previous parties, I've always printed out coloring sheets that go with the party theme, and spread them out on the table with crayons.  However, I decided to change it up a bit this year for Sammy.  He is very much into "making projects"... cutting and gluing paper to make things.  So, this year I put together a "build-a-bird" station.  I pre-cut some body shapes out of construction paper, some beaks and black tufts of "hair."  Then I put out a bowl of google eyes, and some paper shreds from the dollar store.  (paper shreds to make nests!)

Our dollar store had a bag of Easter foamie stickers, so I got a bag and picked out all of the foamy egg stickers.  They were perfect for making nests!  I put out a rack of fun edged scissors, some glue, more construction paper and tape. The kids really got into this and had fun making their own angry birds!!

The cake...I baked a simple cake mix in a 9x13" pan.  We luckily already had an Angry Bird game which had some cute plastic birds, a slingshot, and pigs.  So, I utilized those.  I built up a "hill" for the sling shot to sit on using some brownie bites from the grocery store, and then frosted it all with green.  Next, I built a little nest (pretzel sticks with jellybean eggs), and the stack of "logs" that the pigs are on.


I always make a pull-string pinata.  This year I made a green pig, which was made really similar to the Mickey Mouse pinata I did last year for Toby.  I just made the ears out of construction paper and glued them on. 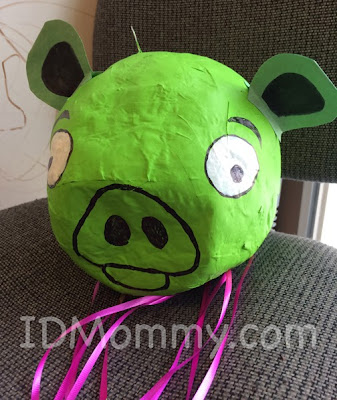 The birthday boy pulled the first string, and happened to pull THE string, dumping the candy!  So, the pinata went really fast!!

Usually I make my own "goodie bags" by decorating paper lunch bags...for their little prizes and to collect their pinata candy.  But, this summer I came across some nice re-useable Angry Bird bags on clearance at Michael's.  I think they were maybe $.75 cents tops.  They also had some other Angry Bird stuff on clearance so I got some bag fillers there too...little notebooks, markers, and stampers.  That was the day I made Sammy commit to his party theme, as I loaded up on these goodies! 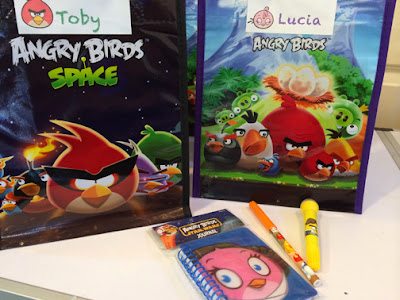 The party went great and everyone had a fun time!  At least it sure beat last year, when the birthday boy spent most of his party throwing up into buckets that I was very busy rotating.  Poor guy.  This year everyone was healthy and a good time was had by all!

We are just a few weeks away from little brother Toby's party, and he will be having a Jake and the Neverland Pirates themed party.  So, you can probably imagine my excitement yesterday as I stumbled upon Target's birthday section, where they had only their pirate themed stuff on major clearance! Score!  I'll be sure to post pics of his party once it happens!!

I also hope to post pics of some of my homemade Christmas gifts that I gave this year pretty soon.  We still have one family Christmas gift exchange coming up on January 1st, so I can't spoil any gift surprises just yet!  But stay tuned for more posts in 2014!  :-)
Posted by Gretchen Fleener at 8:51 PM