Just last week we found out our little 3 year old Toby contracted Lyme's disease, most likely from a deer tick.  (you can see the red rash around his eyes below from that)  I'll do another post on that at some point I'm sure. Then last night he stuck his finger in a birdhouse and was quickly swarmed by wasps and stung three times...twice on his cheek and once on his leg!!

Needless to say, we were due for a POSITIVE bug experience this week!
A couple weeks ago when I was watering the garden I noticed a couple swallowtail caterpillars chowing down on the carrot greens.  Since it had been a couple years since we've been able to find any monarch caterpillars, I put two of these in jars for the boys to watch transform!

These guys are bright green with black stripes.  If you scare them they'll stick out a little forked orange "tongue" to try to scare you back!

One of the caterpillars attached himself to the side of the jar, building a green cocoon: 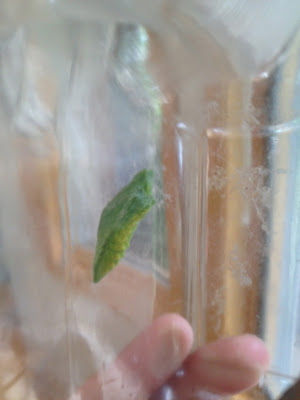 ...and the other one attached to the stick in a brown cocoon that looks just like a branch: 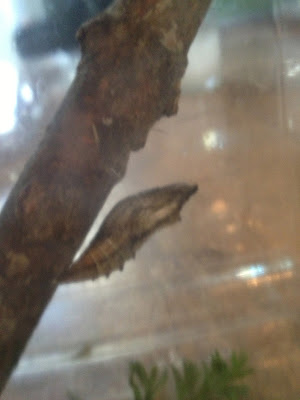 The one above "hatched" today while we were out running errands.  We didn't get to see it climb out of the cocoon, but we did have a chance to let it climb around on us outside while it's wings dried.

While both boys seemed terrified when the butterfly started to fly toward them, I'm hoping we've made a step toward putting our horrible bug incidents behind us!  Sam stepped on a bee earlier this summer and got stung on his foot, so my boys who used to love bugs are now both pretty freaked out by them.  Now to re-condition them for our upcoming family camping trip... ;-)
Posted by Gretchen Fleener at 9:52 PM