My big little man turned 5 a few days ago and we had a Transformers themed party!  Poor birthday guy got so sick so suddenly we had to cut the party off pretty quick.  But, he managed to blow out one candle and make it barely through the pinata before being rushed to bed...we opened gifts the next day and he ate cake a few days later.  So, I didn't take a ton of photos because I was busy tending to my sick birthday boy.  But, I have a few to share! 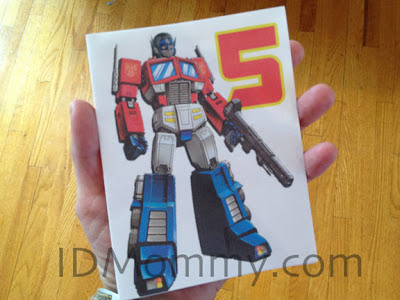 The invitations I made on my computer and printed myself.  I found a great Transformers font free online that worked great!  I got the idea for the wording from some web searches for Transformer invitations..."Sammy is Transforming into a 5 year old!"  Since I painted his whole face to look like Optimus Prime for Halloween, it was easy to put his head on an Optimus cartoon for the front cover! 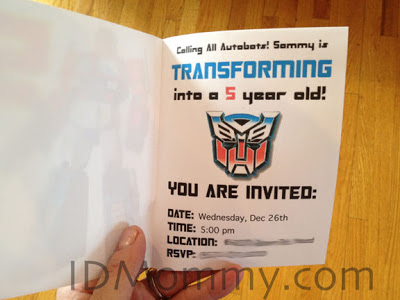 The birthday boy requested a red and blue cake, so I layered two cakes (one red, one blue) with chocolate frosting in the middle.  I colored some cream cheese frosting to cover the cake, and used a tube of pre-made black frosting for all the black areas.  Here are a few cake pics... 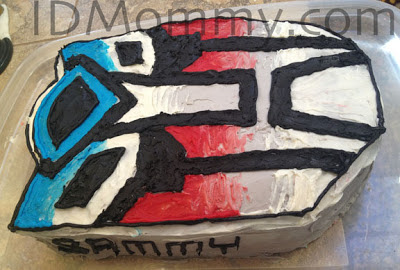 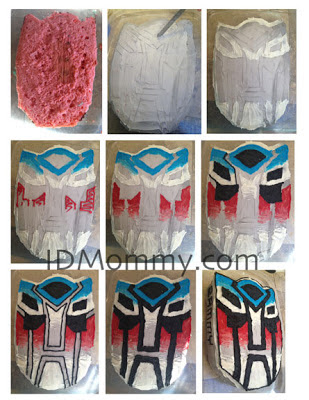 Above are some progress shots of the cake decorating.  (Okay the red cake turned out pink, but don't tell him that. He hasn't seemed to notice.) I just did a Google image search for "Transformers logo" and used that for reference.  It's a little distorted being taller than it should be but I didn't want to waste too much cake making the proportions just right. I cut the outer shape, frosted it in gray, then traced the lines of the design in the gray frosting.  Next I put on some white, then blue and red, which I squeezed on with a small frosting tip and then spread & blended with a knife.  I wrote Sammy's name and a big "5" on the side of the cake. It turned out pretty cool. 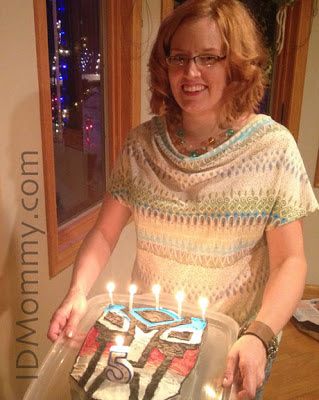 I found some shiny silver candles that worked great and added a "5" candle as well.

For a super easy activity I did a Google image search for "Transformers Coloring Sheets" and printed out a dozen or so, sprinkled them on the table with some crayons, and the kids did some coloring. 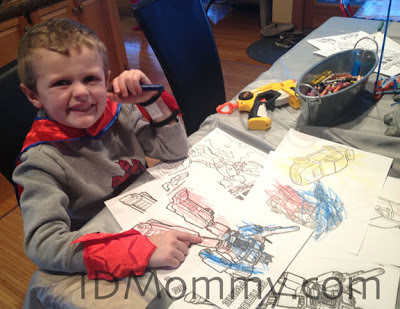 This year I decided to buy the pinata instead of making one.  I was going to try making one that was the simple Transformer face logo but with Christmas and all that was going on, I just ran out of time. Plus when I saw how cool this one was on Amazon, I thought it was worth it.  He now is sitting on Sammy's shelf in his bedroom and I'm sure he will be enjoyed for a while.  It also looked really cool as a centerpiece sitting in the middle of the table up until it was time to use it.

It only comes with 8 strings and we had 9 kids, so I added  a couple.  However, they weren't necessary as it was opened up on the 2nd or 3rd try! 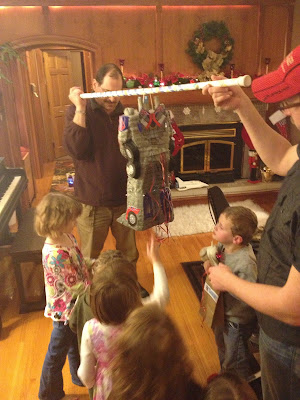 We don't really have a good place to hang a pinata so what I do is just attach it to a pole and then have a couple of the guys hold it above the kids' heads.  It works just fine!  (Thanks to my husband and my Dad!)

I didn't get a photo of the goodie bags, but I made labels with the kids names on them and stuck them to paper lunch bags.  The insides had a few Transformer goodies from Amazon...

The stampers were really fun and it came with a little pencil pouch that I wrapped that up as one of Sammy's gifts.  And with 2 dozen of them, I was able to give a couple to each kid with a few left over.  The cupcake rings were a great hit.  The little bug transformers were cute... cheaply made and I'm still debating whether they were worth the $20, but still kinda cool to have an actual little transformer for each kid.  Then I just added a little candy and the kids used their bags to gather up their pinata winnings.

I meant to play some Transformers cartoons during the party but didn't get around to that..but that's another easy way to add to the theme if you're going with a cartoon or character!

While seeing my little boy so sick that he missed out on half of his own birthday party fun made ME cry, I don't think it ended up phasing him too much.  At least I hope not.  Now to get him well enough to get through the several belated Christmas parties we have coming up in January that were postponed from his last sickness!! Ugh, gotta love this time of year!


Posted by Gretchen Fleener at 2:24 PM