I thought I'd finally post some photos of this year's Halloween costumes.  My 2-yr-old Toby was Mickey Mouse, and 4-yr-old Sammy was Optimus Prime.

Here's what I did in case you're looking to do the same thing down the road....

Mickey Mouse
The Pants: I actually had to totally re-do Toby's Mickey pants because he refused to wear them.  For the first set I bought some tight velvet-y black pants and some loose red shorts.  I actually sewed the shorts to the pants and stuffed them so they looked poofy and more cartoon-y like Mickey: 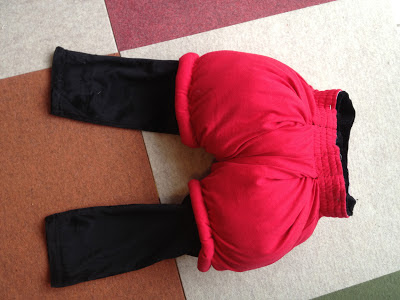 This shot was before I sewed on the big white buttons and added a tail. They looked super cute, but I was never able to get him to wear them for more than the 1 second it took him to yank them down.

Soooo...the day before Halloween we ran back to Goodwill and I got a pair of red fleece sweat pants.  I cut them off to make them shorts, glued on two white felt "buttons," and it still looked pretty cute.  I had to trick him into his costume by dressing him for the day in his tight black shirt in the morning, then put on some of his black dress pants after nap, and convinced him that putting on these red shorts with the tail on the back would help him stay cozy and warm while trick-or-treating.

The feet I made by chopping up a yellow fleece sweatshirt from the thrift store, pillow stuffing, and a glue gun.  They kindof slipped on over the top of his shoes and turned out pretty cute!

The ears and hands I purchased in a set from Amazon.  (click the photo for a link)

The ears were actually really well made and didn't flop over like I thought they would.  I hot glued the headband to a black winter cap, which worked fabulously!  The gloves were really enormous on him, despite being advertised as "child's" gloves.  But, they still looked great! He had to hang his candy bucket around his arm and it was impossible for him to pick a piece of candy out of a bowl though but luckily big brother helped with that.


The Boots: I went to town on some cardboard boxes that were lying around my studio to make his boots.  Sammy was happy to model for me so I could get a good fit! Here are a few photos of the boots in progress...


The Body:
Another cardboard box, of course!  Dang, that stuff is versatile. 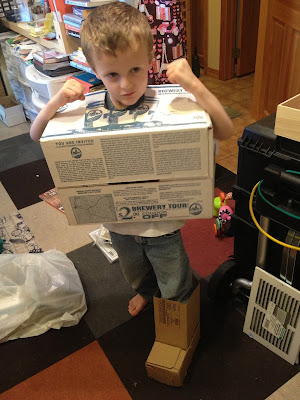 I cut out holes for his head, belly, and arms, making sure they were deep enough that the open edge of the box went just beyond his back. 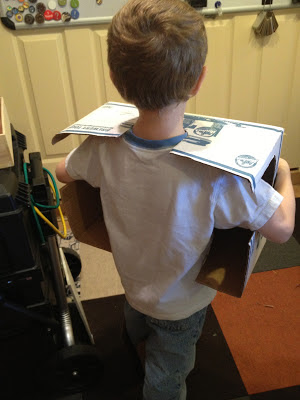 I made the exhaust pipes out of cardboard tubes painted with silver spray paint, and the black "holes" are painted on.  I cut slits into them so they'd slide over the back edges of the box, and then glued them to keep them in place. 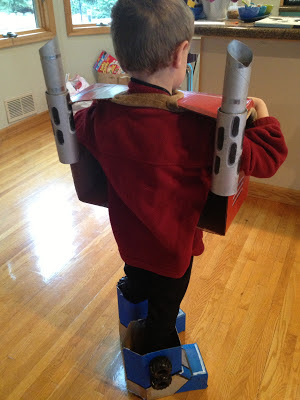 I glued some fuzzy, soft fabric around all those holes so they wouldn't cut into his skin...especially around the neck.  Since the front was heavier than the back, it wanted to tip forward already. So, all we had to to do keep it attached to him was hook it around his neck, and it would hang against his belly.  I basically just continued that fuzzy fabric piece so it would be long enough to go around the back of his neck, and then put some velcro on that strap that attaches to velcro inside the top of the box.

I painted the box of course, and I found a metal grate (that you'd put on your heating duct on your wall) at a thrift store (still brand new for $4), and painted that silver.  I used actual nuts and bolts to attach it to the box.

The Head:
I was excited to find an awesome light-up Optimus Prime mask with sound effects at Target over the summer, on clearance from $25 to $6!  I bought it to be a birthday gift, since we are planning a Transformers birthday party.  But, of course, as soon as I heard he wanted to be Optimus Prime for Halloween, I just HAD to get it out.  He LOVED it, although I knew that it wouldn't stay on him long while trick-or-treating.  So, I painted his face like Optimus Prime too.  Here is a tutorial in case you'd like to try! 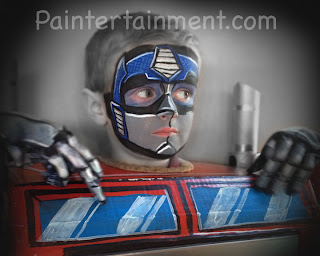 The Hands: I also ordered some Optimus Prime gloves from Amazon.  I was a bit disappointed in the fact that they were so super thin, and the fingers were way too long.  But, they did still look cool and they worked for the one night we needed them. 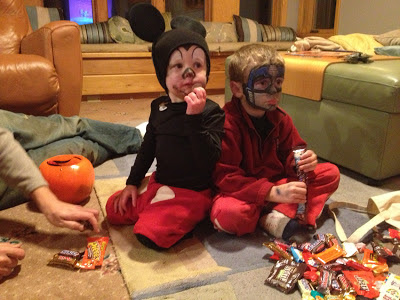 So, we ended with two tired boys admiring their loot over a little Great Pumpkin Charlie Brown before crashing in bed!  All in all it was a great Halloween, and the boys LOVED their costumes!!