Alrighty, folks!  Time for another egg coloring tutorial!  While my last one utilized rubber bands, this one is even simpler...there are no tools required other than your standard egg dye and some careful positioning of the egg in each color. 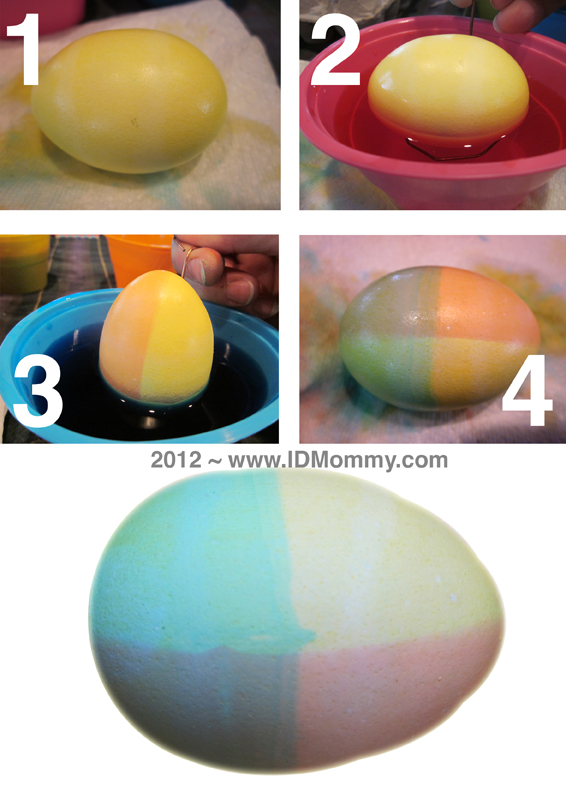 Colored Quarters
1) Dye the entire egg yellow.
2) Lay the egg on it's side, and hold it half way down in red.  The more still you hold it, the more clean your line will be, and the longer you hold it, the brighter the color will be.
3) Let it dry a little, then stand it on it's end and hold it half way down in the blue dye.
4) Dry it off and you should now have 4 colored quarters in yellow, orange, green and purple!  It's a great lesson in color mixing for your kiddo's, too! 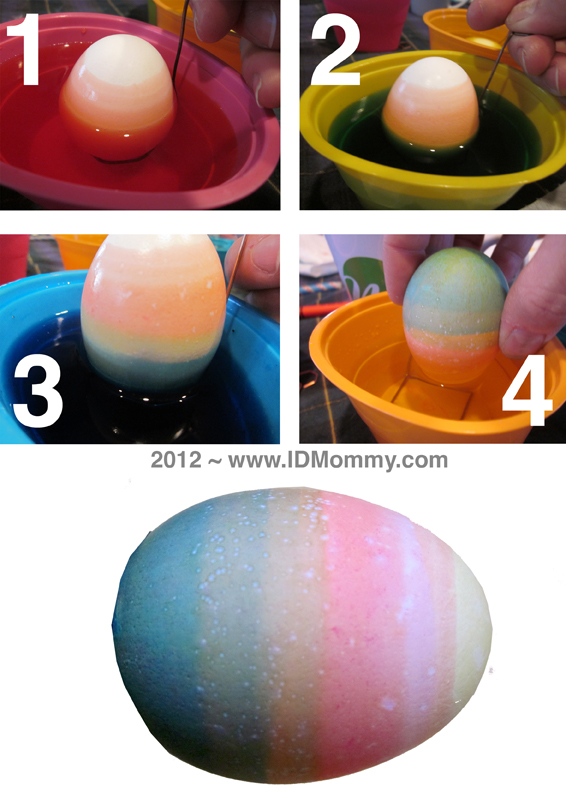 Rainbow Egg (or monochromatic egg)
1) Stand the egg on it's end, then dip it almost all the way into red, leaving a little circle of white on top.  Now lift it up 1/4" or so, and hold it there a couple more minutes to get a darker stripe.  Repeat that again to get a third stripe.  (You can just do this over the whole egg to get a monochromatic striped egg, or keep going for more colors...)
2) Dip the egg in green, with the dye line about 1/4" or so below the darkest red stripe.  Pull it out 1/4" to again make another darker green stripe.
3) Dip the bottom of the egg in blue, adding more darker stripes if you have space.
4) Turn the egg over and dye the white tip in yellow. 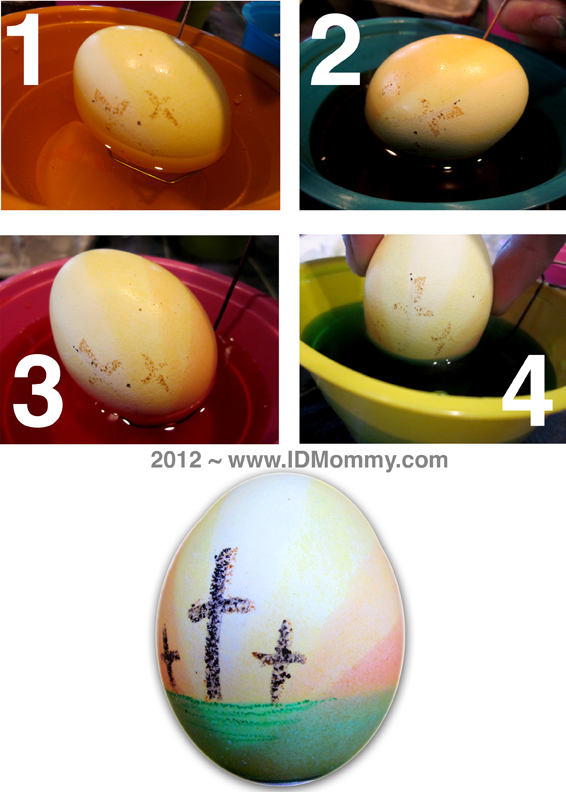 He is Risen! "Sunrise Egg"
This one is all about the angle of the egg as you place it in the dye, and looks pretty with the three crosses in the foreground.  I used a crayon to draw them first, but then had to go over it again later with a darker crayon as it didn't stick well.
1) Draw your crosses with crayon as a guide for the sun ray placements. Dye the whole egg yellow.  Then lay it on it's side but at an angle, to create the darker yellow rays of sun on either side of the center cross.
2) Angle the egg a little more and dip it again (on both sides) in orange. (Sorry the photo is confusing with orange dye in a green cup, but it's orange!)
3) Angle it again a little more, then dip in red.
4) Dip the bottom of the egg in green to get the grassy hill.

Have a little fun with these experimenting with different angles and color combinations!  You can even do any of these, then put rubber bands on them and dye them again for all kinds of funky color patterns!

Posted by Gretchen Fleener at 2:02 PM