My Adventures in Not-so-Extreme Couponing!

So, check this out.  Here's what you can get for about $14 regular price at Rainbow Foods: 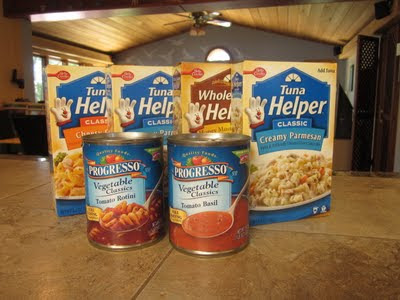 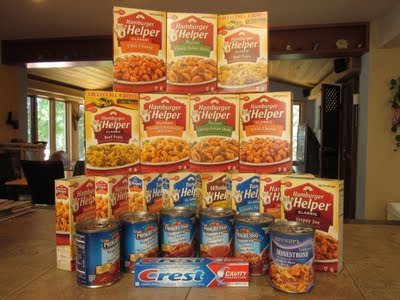 I think we're set on Hamburger Helper for a while! How did I do it?
- Rainbow had a 10/$10 sale on Hamburger Helper and Progresso soups. (oops, I know, I got 1 extra soup today!)
- I had a few manufacturer coupons to spread among each item (a couple "$1 off 5 Hamburger Helpers", etc)
- I went on Wednesday: Rainbow doubles manufacturer coupons with face values of up to $1 ($2 max savings per coupon; they double up to 5 coupons and I had 5)
- Toothpaste was free! (on sale for $0.99, I had a $0.50 coupon that was doubled, so they gave ME $0.01)
- And there's more.... that's not counting the money I'll get off of gas from their rewards card, or the other $4 in coupons that printed out on the register for my next trip.

I know there are much more experienced couponers out there who could probably get the store to pay them to take this food, but considering the difference between using some coupons and not using any, this got me excited enough to blog anyway.

Don't worry, I'm not going to turn this into a couponing blog, but I thought it was about time I share my recent adventures in couponing for those of you moms who would like to try it but are overwhelmed by the idea! I've only been trying to utilize coupons for 3 weeks but have already seen some massive savings.

I caught a 10 minute glimpse of an "Extreme Couponing" show probably a year or more ago.  I was amazed at how much people were saving, but at the same time found it totally overwhelming, even being the bargain hunter I am.  Seeing videos of people dedicating entire rooms in their house to their stock piles, pouring through circulars through the wee hours of the morning, spending 30 hours a week strategizing shopping trips and digging through dumpsters for coupons just didn't seem worth it to me, or at all possible while raising 2 boys and running 3 businesses.  I still do not understand the extreme couponers who have hundreds of deoderant or toothpaste tubes for themselves...At some point doesn't stuff expire and then you're just wasting it?  But I do love the stories of people who donate their deals to more needy families, charities, or to send to our troops!

So I decided that hey, this is TV.  People wouldn't watch it if it weren't "shocking" and "extreme."  But I didn't have to be "extreme."  I don't have to dedicate my life to accumulating "stuff." I just wanted to save some money. I decided to at least subscribe to the Sunday paper and get in on SOME of these deals.  I'm finding that without being SO extreme, I'm still saving $60-$100 in a week!

Sure, there are people who somehow stock pile hundreds of copies of store circulars...I'm not sure how they do this but I'm not interested in dedicating THAT much time on it.  I don't want to miss out on my boys' childhoods because I'm held up in the basement with a pair of scissors. But here's what I've been doing, which hasn't been all THAT time consuming, and has really paid off so far...

1) I get the Sunday paper.
2) I pull out the coupons and the store ads for Target, Walgreens, Rainbow & Cub.
3) I clip the mfr. coupons for any product I think we'd use. (brand loyalty goes out the window)
4) I organize them in my little alphabetical file that I got at Target for under $5 that fits in my purse: 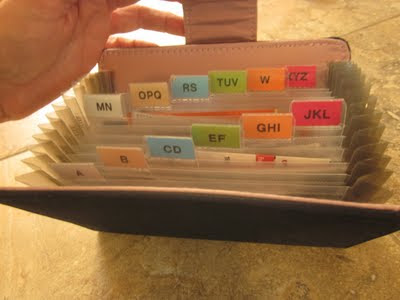 5) I flip through the store ads and see where I can match up a store coupon, a manufacturer coupon and a store sale on the same item. (Couponers call this "stacking") 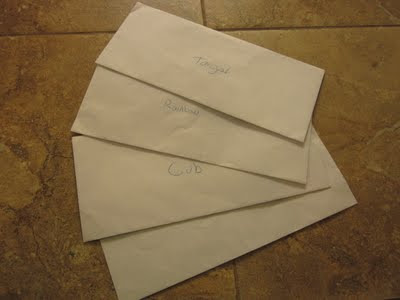 Here are a few things I tell myself to keep myself from turning into the crazy coupon lady:

- You don't need to clip EVERY coupon.  For example, skip the dog food coupons if you don't have a dog...unless you have a pet owner friend to donate to.

- You don't need to spend a ton of time on this. One hour a week WHILE watching TV or in the car or doing something else will save a lot of money! My suggestion to get started: Pick up one Sunday paper at the gas station, and start by matching up coupons/sales from just one store's insert.  I'd try Walgreens or Rainbow as they seem to get the best deals for me so far.  See what you can do, and if you like it, try two stores the next week if you have the time!

- You don't need a massive storage room.  If you have plenty of shampoo already, either don't go buy more for a while, share your coupons with a friend, or donate some to charity! And if you DO have the room to stock pile enough stuff to take care of your family for a year, more power to you! Who knows, it could come in VERY handy if someone loses a job or you get into another tight spot!

So there's one example of one store I have been saving a lot of money on, and how I've been going about it.  So far I've already had a few instances where a store actually paid ME to take something, which gets my bargain hunter's heart fluttering. I know I'm a total newbie, but each week I seem to be saving more and more off my total bill.  So my point is this: If you want to get in on saving money, you can do it without going so extreme and still make a big impact on your budget in the end!  So give it a try and see what happens! You've got nothing to lose except space in your pantry!

Posted by Gretchen Fleener at 1:47 PM