A couple weeks ago I was tucking Sammy in for bed and he looked all serious after we finished our bedtime story and prayers.  With a sigh he said, "Mommy, I have a lot to do."  I asked him what he had to do, and he proceeded to list off all of the things he needed to do...build a scarecrow that moves from a windmill like on Curious George to scare birds away from his carrot garden, build a new house with a "high ceiling" out of his Legos, and build a robot.  I laid there in his bed for 45 minutes as we had an in depth brainstorming session about what to put on the robot he had to build, and I finally cut off the conversation with a promise that we'd make a trip to AxMan Surplus the next day and I'd help him build his robot.

The next morning, the first words to come out of his mouth as he stepped out of his bedroom were, "We're gonna build a robot today!" So, after church we dropped off Daddy and Toby at home and headed to AxMan. 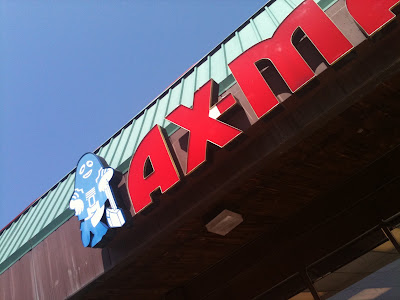 Ax-Man is a strange, wonderful, and magical place for a specific group of strange people like myself.  A land of colors, textures, and bins and bins of unknown objects just screaming for a use.  Even if you don't buy anything, it's entertaining just to read the funny hand made signs that illustrate the various made-up purposes for each item. 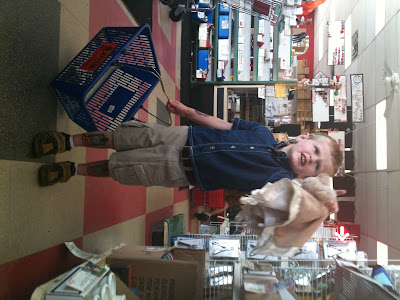 I think the only thing more excited than a kid in a candy store is my kid in Ax-Man.  Both the fact that the ideas in his little head keep him up at night, and that he was so deliriously happy in Ax-Man were concrete proof that he is MY child! 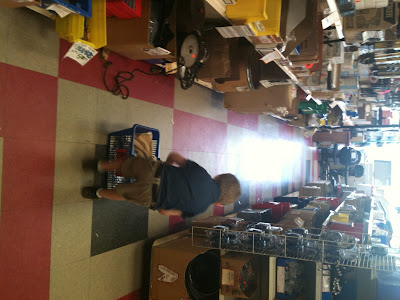 Sammy was on the verge of being uncontrollable in his excitement.  Two feet into the store I had to start pulling him along to see what else there was. "Here's something!" he'd yell, take two steps, "I found something!" We didn't have a lot of time, as we encroached upon lunch and nap time, so it was quite a challenge to get him to keep walking through all of the aisles to fill our basket. 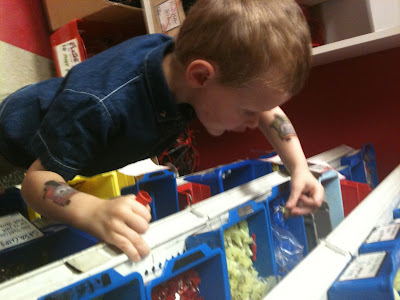 He had a blast picking out knobs, buttons, gears, springs, you name it, to stick on his robot.  My plan was to make a cardboard "body" to attach whatever he found to, just like I did as a kid.  You can see here he has Thomas face paints on his arms, which I did the day before.  (I can't go do a face painting gig now without him asking to be painted too when I get home!) About 40 minutes later we got to the checkout the guy ringing us up handed him a few Ax-Man temporary tattoos.  "He looks pretty hard core with those Thomas tattoos," he said, "so I thought he might like these!"

In the end we left with a brown paper bag full of $29 worth of random robot parts! 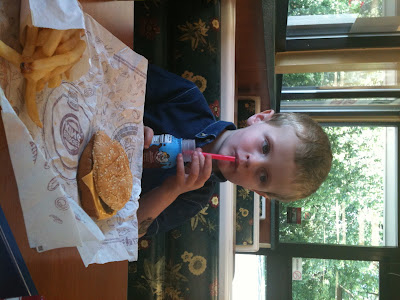 By then we were way past lunch time, and even getting into nap time. We stopped at Burger King for lunch since it was the only place I could find nearby.  Over burgers we talked about the robot project, and how Mommy and Daddy met each other 16 years ago working at a Burger King.


Back at home while Sammy napped, I found a cardboard box and spray painted it silver. 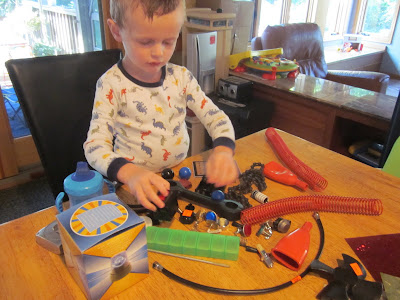 It was tough, but we waited until little brother Toby went to bed before we dumped out our bag of choking hazards all over the kitchen table and began our robot assembly. I saw several items that I never knew made it into our shopping basket, but of course Sammy knew right where he wanted them! 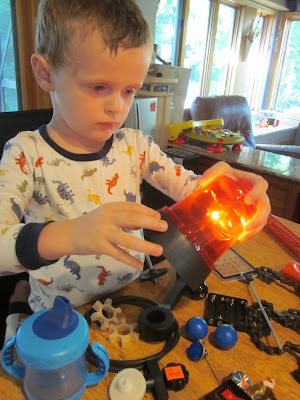 This light was the most expensive piece at $4.95, but definitely a highlight of the robot, to be placed on top of his head like a police car.  Sadly, after just a few minutes of running, the light stopped spinning and it made an awful noise that scared Sammy, so we had to remove it.  If I ever make it back out to Ax-Man, maybe we can exchange it.  :-( 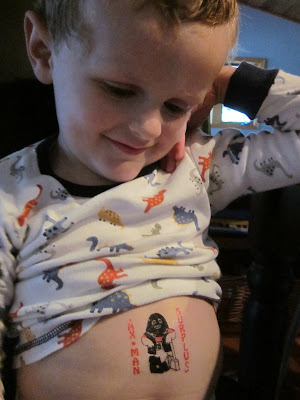 We had to put the tattoo in his favorite place to put temporary tattoos....on his belly. 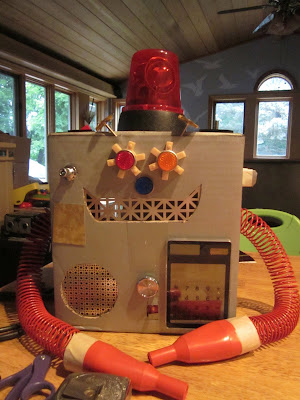 Here is the robot at the end of night one.  We stayed up and worked on it until Mommy was too tired and Sammy had to go to bed, but added more over the next two days.  There is a door in the back where Sammy put a few items inside. He has reflectors and gears for his eyes and nose, knobs that turn, switches that click, spring arms, an on/off switch, and a clear calculator that acts as a window into the inside. 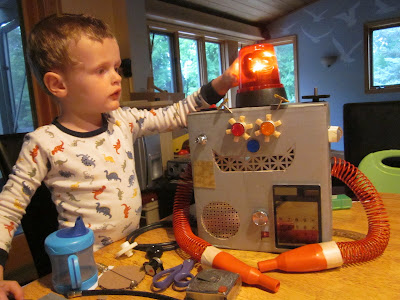 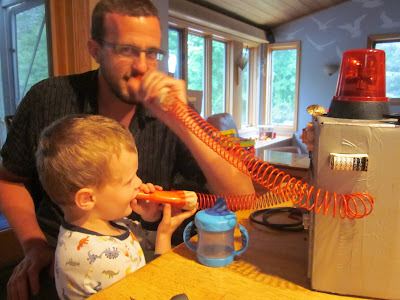 Here he is showing Daddy his cool new robot.  We decided to name him "Yorbo," like the robot on a recent episode of Curious George.  The first night he took him to bed, then asked me to take him away, then he asked for him back again.  (He has sortof a love/fear relationship with his toy robots) But, he now is a beloved addition to his bedtime companions, and is the first "toy" to be put up out of little brother's reach in the morning so he doesn't "wreck him!"
Posted by Gretchen Fleener at 2:57 PM