Make Your Own Fake Spill for April Fools Day!

I am wishing I had thought about it earlier on, but we did end up doing something for April Fools Day this year!  Since Sammy has been a big hot chocolate drinker all winter, I thought we'd try making a fake hot chocolate spill to "fool" Daddy when he got home.  Here's what we did. 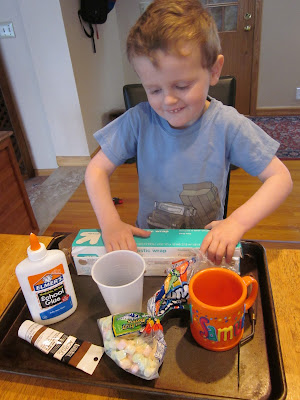 Step 1: Squeeze some white glue into a disposable cup.  We just used one of these plastic party cups we had around, but a paper cup or empty food container would work fine too. 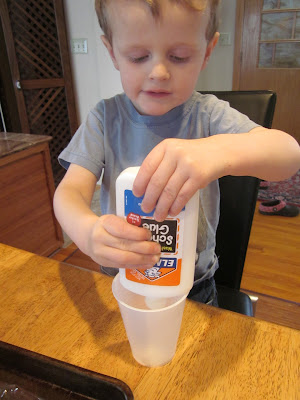 Step 2: Squeeze some brown paint into the glue. I used acrylic...I bet tempera would probably work fine too. 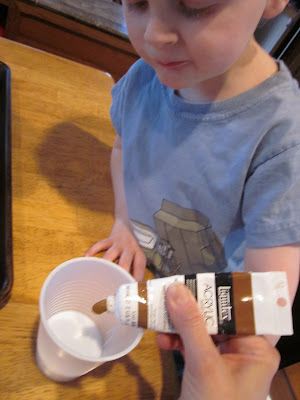 Step 3: Stir. You may need to add more paint and adjust the color as you go.  I ended up adding a little bit of black too.  Make sure it's nice and even so you don't end up with streaks of color. 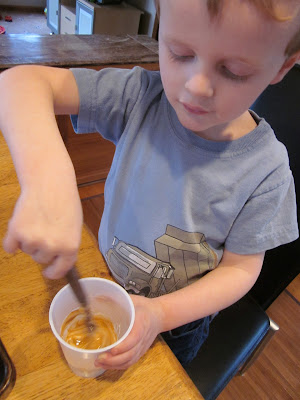 Step 4: Put the end of a piece of plastic wrap inside the cup you want to use for the setup, and working over a cookie sheet (so you can move it all later), pour the glue into the cup. You could just use the disposable cup as your fake spilling cup, but we decided to use Sammy's mug with his name on it, since that's what he really uses for hot chocolate, to make it more real. 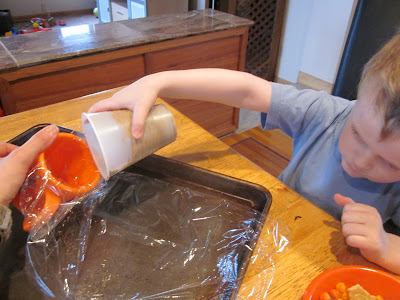 Step 5: Set the cup down, being careful that the glue stays only on the plastic wrap, and spread it around a little.  The thinner it is, the quicker it'll dry. 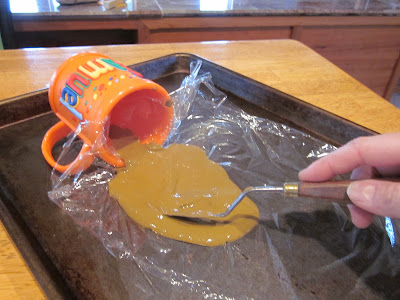 Step 6: Add marshmallows! Sammy had fun sprinkling marshmallows into the "spill!" (and eating a few along the way) 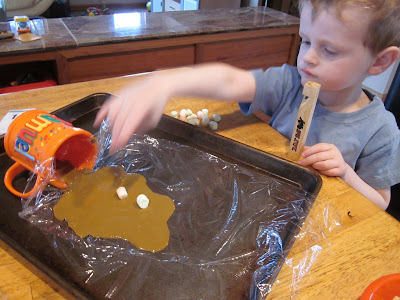 Step 7: Wait until it dries.  I am wishing I had started this a day or two in advance so it could properly air dry.  We started it when Daddy left for work in the morning, and I had to point a fan on it all day to get it to dry.  (after taping the saran wrap down so it wouldn't blow over on the glue!) I also had to peel it up and flip it over to dry the other side, because it was a little too thick to dry in time.  This ended up making a wrinkly looking puddle, but it worked okay.  (We did it on the cookie sheet so I could move it off of the table) 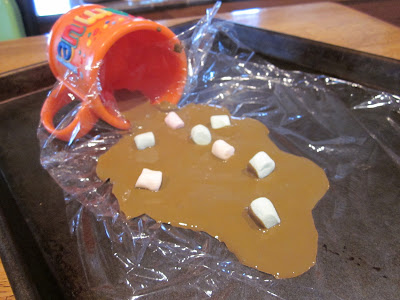 Step 8: Set up your trick! Peel off the plastic wrap and position your spill.  Yeah, this looks really weird and wrinkly, which like I said, was from trying to speed it up with a fan!!  But, the color turned out pretty well. I tried to convince Sammy that a spill on the carpet would be more dramatic, but he was set on doing it on the kitchen table! 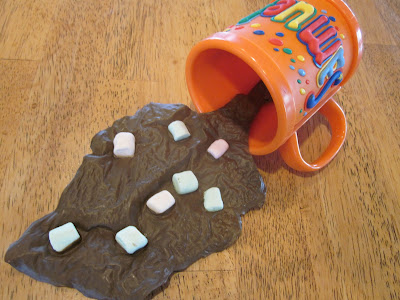 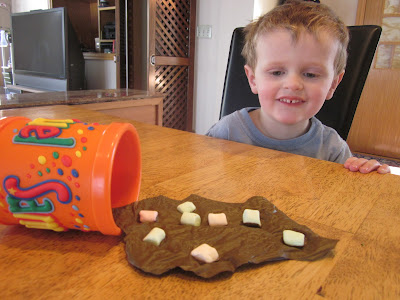 Step 9: Fool your victim!  Here's Daddy coming in the door from work, while Sammy points out, "Daddy! I made a big huge mess!!"  I think he was actually fooled for a second, until he saw that it was kinda wrinkly and didn't sit flat on the table.  Ha!  Even if it did totally fool him, he probably wouldn't be too worried about it since he has a wife who cleans up these sorts of things.  But, it was a really fun way to make the day fun for Sammy by doing a project and playing a trick on Daddy! 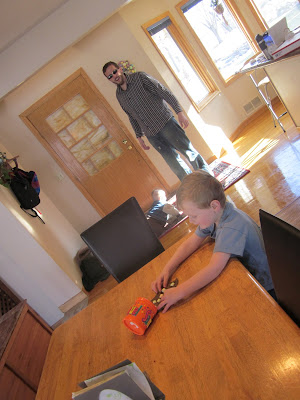 Later we went out for dinner and brought along his fake pile of peas from his toy kitchen.  We put it on Daddy's plate...not sure how well it blended being that we had pizza and suddenly he had peas on his plate, but he was a good actor.  ;-)

Posted by Gretchen Fleener at 4:30 PM